Cells at the Edge

Not so fast with the antioxidants? 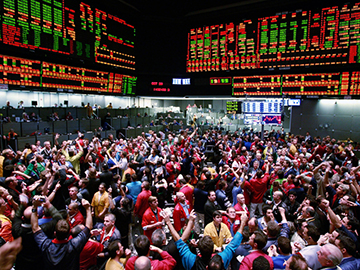 In the tiny Wall Streets of our cells, proteins engage in a brisk electron trade. Some sell, becoming oxidized, and some buy, becoming reduced.

Research has indicated that balancing this market is critical; too much oxidation has been linked to age-related diseases including cancer, Alzheimer’s, Parkinson’s and diabetes.

It would make sense, then, that cells need a buffer to help stabilize oxidation. For more than 50 years, scientific literature has avowed that the buffer is a substance called glutathione.

A new study from Harvard Medical School just turned that dogma on its head.

Based on studies of the microscopic worm Caenorhabditis elegans, the team reported in Nature Communications that glutathione is actually the opposite of a buffer: It serves as a highly sensitive dial that can turn up or turn down oxidation based on the inputs it receives. Rather than stabilizing cost, the glutathione system adjusts the price of electrons based on subtle fluctuations in the market.

“Instead of being in a comfortable buffer zone, cells are right at the knife’s edge,” said Javier Apfeld, HMS instructor in systems biology and co-senior author of the paper. “This was really unexpected.”

After digesting their surprising discovery, the authors went a step further and argued that cells may not need an oxidation buffer at all.

“Protein oxidation has been considered a type of damage to be avoided. Our results suggest that protein oxidation is instead a system of information flow,” said Catalina Romero, research fellow in systems biology at HMS and first author of the paper. “Rather than repairing damage, glutathione may be communicating change.”

What may be happening in diseases of dysregulated oxidation, the authors proposed, is that glutathione relays miniscule changes too loudly. “It’s yelling things that wouldn’t normally be audible in the cell,” Romero said.

This study “provides a framework to reinterpret decades of data” about glutathione, said Apfeld. “It helped us open our eyes. In retrospect, this role for glutathione is obvious.”

“This is very thought-provoking science that may necessitate revisiting the perspective offered in some textbooks,” said Walter Fontana, HMS professor of systems biology and co-senior author of the paper.

The findings could have ramifications for the study and treatment of oxidation in age-related diseases and even the use of antioxidant supplements.

Until recently, researchers didn’t have tools to examine glutathione’s role in regulating oxidation in multicellular creatures. The team, which also included HMS instructor in systems biology Debora Marks, was able to conduct its experiments because of new fluorescent sensor technology that made it possible to measure protein oxidation with “delightful” spatial and temporal resolution in individual live organisms.

They found that oxidation varied widely from worm to worm and even between and within tissues in individual worms. Now they’re investigating how such spatial patterns might correlate with aging.

Although the study was based on C. elegans, the team believes the findings will be relevant for human biology since the worms share the same glutathione system as organisms from bacteria to humans.

The study was supported in part by grant R01 AG034994 from the National Institutes of Health and by a project grant from the Paul F. Glenn Laboratories for the Biological Mechanisms of Aging at Harvard Medical School.