Cell Division, Minus the Cells 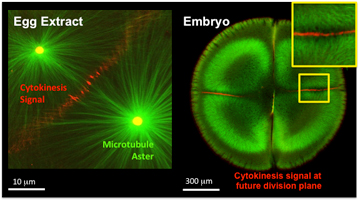 The process of cell division is central to life. The last stage, when two daughter cells split from each other, has fascinated scientists since the dawn of cell biology in the Victorian era. For just as long, it has been notoriously difficult to study this final step, when the dividing cell creates a furrow before cleaving in two.

The name given to this process by those early biologists, cytokinesis, translates as "cell movement" and captures the sense of a highly active and organized series of events. Scientists have now learned much more about the proteins involved and their behavior, and yet a central mystery remains: How does the cell signal where the furrow should be?

There is a simple reason for that blind spot: It’s hard to see and test such a complex feat in living cells. Now Harvard Medical School systems biologists report in Science that they have reconstituted cytokinesis—complete with signals that direct molecular traffic—without the cell. Combining frog-egg extracts with lipid membranes that mimic the membrane of the cell, they built a cell-free system that recapitulates how the cleavage furrow is assembled.

This cell-free system has two huge advantages: It expands the scale of the furrow-building events, making them easier to see, and it gives the researchers an easy way to manipulate the proteins involved. Quickly removing and returning proteins to see how changes in the molecular players affect cytokinesis is impossible when the cell is whole, but easy when the cellular innards are spread out on a microscope slide.

The key challenge, though, was that the behavior of cytokinesis is entirely dependent on having a membrane to furrow—and membranes are exactly what have to be removed to make the system cell-free. What made this work possible was the realization that a controlled, flat membrane—made from two layers of artificial lipid supported on glass—could substitute for the curved, constantly moving and complex membrane of the cell.

“We really built what goes on in the cell,” said Timothy Mitchison, the Hasib Sabbagh Professor of Systems Biology at HMS. “We believe our work is a step forward, not only for understanding the assembly of the cleavage furrow but also, more generally, for understanding the biophysics of cytokinesis signaling.” 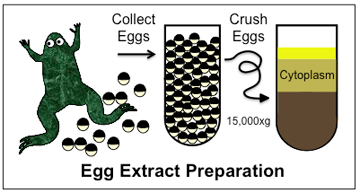 To start, the scientists turned to their molecular stockpile to come up with such building blocks as artificial centrosomes and fluorescently labeled microtubules. They then mimicked fertilization and added labeled antibodies or proteins to visualize the self-organization of structures required for the cell division process, using fluorescence microscopy in ways that aren’t possible with actual living cells in tissue cultures.

The final component was the model of the cell membrane.

“To really prove that we reconstituted the cytokinesis signal, we needed to add the bilayer membrane and then see if it could recruit the proteins that would be on the cortex of the cell,” Field said about the specialized layer beneath the cell membrane. “That’s the signal to the membrane we were looking for.”

The scientists saw this signal in part because Field chose to include actin in their system, a cellular component that is often discarded because it makes it so difficult to do experiments with the egg extract. Actin's job in the cell is to assemble into long filaments and meshworks, like Lego blocks fitting together.

The filaments provide a scaffold that allows other cellular components, including membranes, to move and change shape.  So Field reasoned that, despite the difficulty of using actin, it would be important to include it in a system intended to recapitulate the signals involved in membrane furrowing. 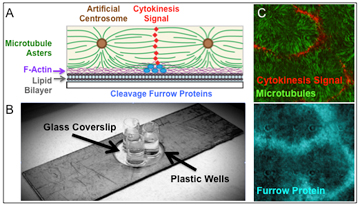 There are multiple signaling complexes at work in the cleavage furrow, “talking” from the microtubules to the actin cortex and the cell membrane.

”The beauty of this system is that we have reconstructed cytokinesis from its individual structural components: actin, microtubules and membranes,” said Groen. “And we can now begin to spatially manipulate these components, which is not possible in live cells. I’m very excited by the possibilities.”

Their work is science at its most basic, Mitchison said, but cell division is central to embryonic development, stem cell renewal and cancer.

“These processes we talk about are the same as what's going on in our bone marrow to make new blood cells, for example,” he said. “So clearly understanding this biology is relevant to many types of diseases.”

This work was supported by NIH grants GM39565 and GM103785, and Marine Biological Laboratory fellowships from the Evans Foundation, MBL Associates and the Colwin Fund.