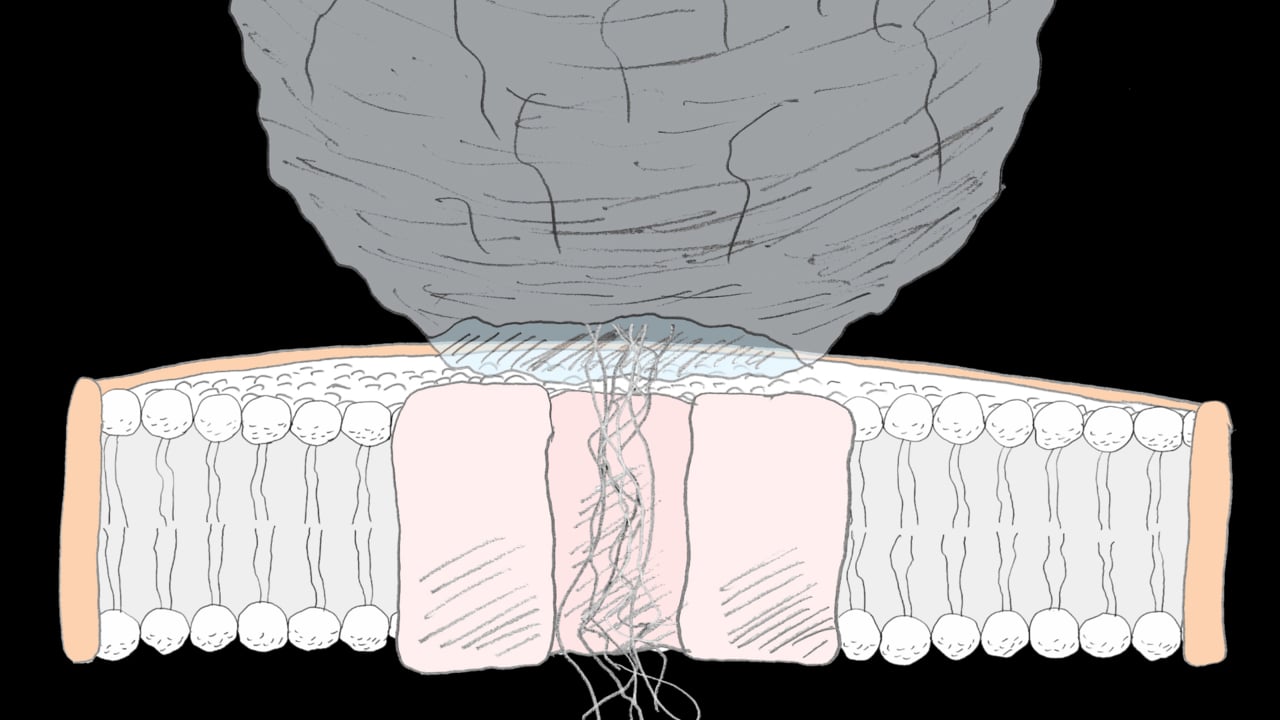 Harvard Medical School researchers have improved the design of tiny nanodiscs—synthetic models of cell membranes used to study proteins that control what enters and leaves a cell. The enhancements provide an unprecedented view of how viruses infect cells.

The new nanodiscs are more stable than previous versions and, for the first time, can be made in several precise sizes and shapes.

“We finally have a defined environment where we can study how viruses or other proteins interact with membrane proteins and get details as never seen before,” said Gerhard Wagner, the Elkan Blout Professor of Biological Chemistry and Molecular Pharmacology at HMS and senior author of the study.

The design improvements mean scientists can now watch under a microscope as viruses—in this case, polioviruses—dock with the nanodiscs, open a pore and inject their genetic material.

“One of the major goals in virology is to understand step by step how viruses enter cells and to make a ‘molecular movie,’” said first author Mahmoud Nasr, a research fellow in the Wagner lab. “The hope is that these nanodiscs will help us gather more details about this process so we can design vaccines and small-molecule drugs to prohibit virus entry.”

In addition, embedding different proteins in the nanodiscs and tumbling them around in nuclear magnetic resonance (NMR) spectrometers provides sharper images of the proteins’ structures and dynamics than were previously possible, helping researchers better understand the proteins’ functions in the body.

The findings were reported in Nature Methods on Nov. 21.

So-called phospholipid bilayer nanodiscs are basically bundles of fat cinched around the waist by a pair of protein belts. The fats, or lipids, form a double layer like that of the natural cell membrane. Scientists can then embed membrane proteins in the bilayer.

Nanodiscs emerged in the early 2000s as an alternative to other membrane surrogates that are oversized or unstable or that require detergents, which interfere with natural protein dynamics. But nanodiscs presented their own problems. For instance, researchers couldn’t make them in consistent sizes, throwing off test results.

Wagner’s team recognized that the trouble probably lay in the fact that the protein belts surrounding the nanodiscs gaped open, so that discs ballooned with uneven amounts of lipid.

Sure enough, when the scientists did some fancy chemistry to buckle the belts, the nanodiscs came out in a much narrower size range. The discs also held together better over time and at the high temperatures necessary for NMR experiments.

The researchers found that they could shorten or lengthen the belts and still close them, allowing the nanodiscs to be custom-sized to fit specific membrane proteins. So far, they’ve made discs with diameters of 9, 11, 15 and 50 nanometers.

Being able to control the size of nanodiscs expands the tools’ usefulness for a range of proteins and technologies. NMR requires small discs and proteins, for example, while electron microscopy often needs big ones.

“You can’t use small nanodiscs to study huge protein complexes or to look at viruses, which need a minimum surface area to form a pore,” said Nasr.

Most of the nanodiscs are circular, although the scientists are also tinkering with an array of polygonal shapes, from triangles to hexagons.

“We hope that by packing together more efficiently than circular nanodiscs, the polygonal nanodiscs, especially if we can make smaller ones, will help us grow good crystals, which provides another way for us to solve the structures of the membrane proteins we embed in them,” said Nasr.

Down the hall from Wagner’s lab, James Hogle, the Edward S. Harkness Professor of Biological Chemistry and Molecular Pharmacology at HMS, and his postdoctoral fellow Mike Strauss were running into roadblocks trying to learn how simple viruses, such as polioviruses, get into cells.

“Something has to go across the membrane,” Hogle said. There was some evidence polioviruses opened pores in the membrane and sent only their genetic material through, but the model systems the researchers were using, called liposomes, were too irregular and unstable to show what was happening in the membrane.

“We couldn’t see the bits we were interested in,” said Hogle.

Eager to find out whether the modified nanodiscs provided a better view, Hogle and Strauss teamed up with Wagner and Nasr.

First, Nasr built 50-nanometer discs that were big enough to hold all the puzzle pieces. Then the team embedded proteins in the nanodiscs that bind to polioviruses, added poliovirus particles to the mix, froze the samples and took snapshots through a cryo-electron microscope.

“We asked the virus, ‘Come attach to the nanodisc, enter the cell and show us what you do,’” Nasr explained.

The images showed some virus particles taking the bait—attaching to the receptor proteins, opening what looked like pores through the lipid bilayer and releasing their RNA as though trying to infect a real cell.

“No one had seen such a pore before,” said Nasr.

The researchers haven’t yet confirmed that the objects they’re seeing are truly pores, but, Hogle said, “We know they’re there because the RNA is going across.”

Nasr is now trying to make even better-tailored 30-nanometer discs to help Hogle’s team determine the structure of the poliovirus/receptor protein complex and dig further into what’s happening in the membrane.

“The nanodiscs are an exciting technique,” said Hogle. “I can’t imagine any other way of seeing what the pore looks like. Mahmoud was very clever to get these working and create a system that opens the door for a wide variety of studies.”

The researchers hope their initial results encourage others to use the nanodiscs to scrutinize many virus/receptor interactions. Already flooded with requests for collaboration, Wagner’s group has made a collection of protein belts available and is publishing a detailed protocol so other labs can build the nanodiscs on their own.

Beyond studying viral entry, Wagner’s team demonstrated that the nanodiscs can improve NMR results and allow more membrane proteins to be studied using NMR. Those include G-protein coupled receptors, which about 40 percent of today’s drugs are designed to target.

“With this technique, we can get fantastic spectra,” said Wagner.

Because the nanodiscs don’t break down at high temperatures, “we can do NMR experiments for weeks, and the GPCRs don’t degrade,” said Nasr.

The nanodiscs also appear to stabilize the proteins embedded in them.

“They’re highly resistant to protein-cutting enzymes going in and attacking them,” Wagner said.

Strauss has since moved from HMS to the Max Planck Institute of Biochemistry in Munich, Germany, although he continues to work on the project. Additional collaborators were based in Germany and Switzerland.