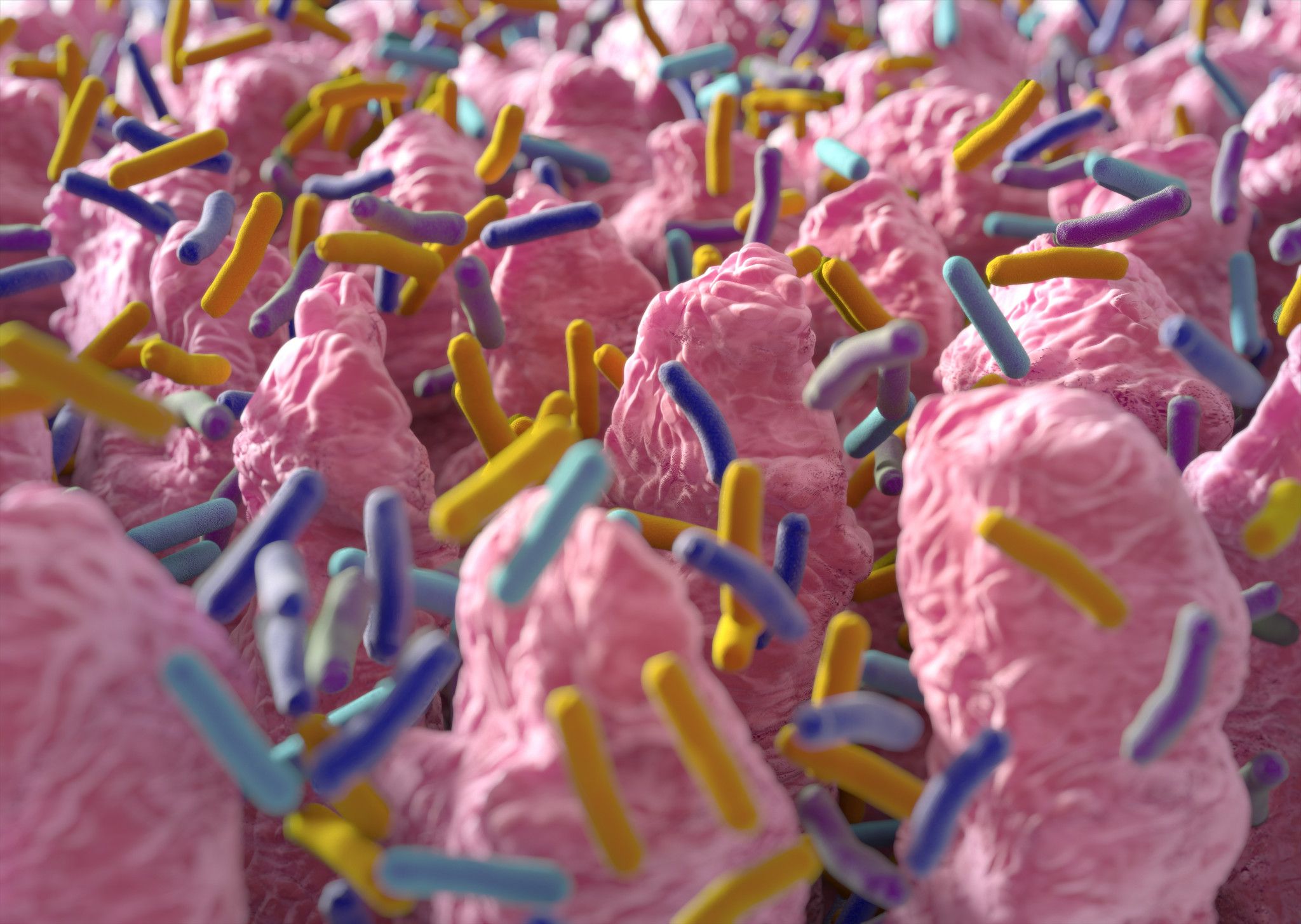 By engineering amino-acid dependence into four different species of bacteria commonly found in the gut, researchers were able to improve the whole consortium’s robustness and evenness, suggesting that their approach could be used to treat human gut diseases and other problems. Image: Shutterstock

Bacteria, like people, have complicated relationships: they can either be friendly, neutral or antagonistic toward each other, and those relationships can change depending on the situations in which they find themselves. As interest in identifying the bacterial species present in the human microbiome that contribute to health and disease has exploded in recent years, so too have efforts to understand how different species of bacteria interact.

This knowledge could enable the creation of bacteria-based therapies and tools that could be used to improve human health, produce valuable substances or repair microbial ecosystems. However, teasing out the relationships that occur simultaneously between multiple species within a consortium of bacteria in a complex environment like the human gut has proven to be a Herculean challenge.

Now, science is one major step closer to that goal, thanks to the efforts of a team of researchers from Harvard Medical School’s Blavatnik Institute, the Wyss Institute for Biologically Inspired Engineering, and Brigham and Women’s Hospital.

In a new paper published last week in mSystems, they report that they were able to successfully manipulate four different strains of bacteria in a consortium so that their interactions became beneficial rather than antagonistic and their respective numbers became more balanced in environments of varying complexity, including the guts of living mice.

“Whenever there are multiple species coexisting in the same space and using the same resources, they are likely to be antagonistic toward each other because they are both trying to be the one that survives,” said first author Marika Ziesack, research fellow in systems biology at HMS at the Blavatnik Institute at Harvard Medical School and at the Wyss Institute.

“By pushing the bacteria toward more mutually beneficial interactions, we can ultimately make the whole consortium of species more robust and resilient and could hopefully one day develop synthetic consortia that are optimally tuned for various applications in human gut health and bioproduction,” Ziesack said.

To get the bacteria to play nicely with each other, the researchers modified their genomes so that each species was unable to produce three of the amino acids it needs to function and was made to overproduce a fourth amino acid. Each species could therefore only thrive if the other three species were present in the community and producing the amino acids it lacked, which encouraged the bacteria to adopt a more live-and-let-live approach.

Such metabolite cross-feeding between species is common in nature—humans cannot produce nine of the 20 amino acids we need to maintain our bodies, so we have to consume a varied diet to get those essential building blocks.

Many bacteria also depend on other species for compounds that they lack the ability to make, and such co-dependence is thought to help make bacterial consortia more diverse, which in turn helps them resist dominance by any one species or loss of a crucial member that could lead the consortium to collapse.

The four bacterial species the team chose to create their artificial consortium are all found in the mammalian gut: E. coli, S. typhimurium, B. thetaiotaomicron and B. fragilis. Each strain was genetically modified to overproduce either methionine, histidine, tryptophan or arginine while the ability to produce the other three amino acids was knocked out.

Compared with a control group in which compounds from a non-overproducing strain were added, each of the overproducers was able to rescue the other strains to varying degrees, depending on how much of a given amino acid each strain needed to grow.

To see how the four modified strains interacted collectively as a consortium, the researchers cultured them all together and found that they grew in roughly the same proportions but at lower total numbers than non-engineered versions of the same strains grown together, showing that all of the deficient strains were able to get enough amino acids from the others to survive and reproduce.

The team then repeated this experiment multiple times, each time reducing the starting population of one strain ten-fold to see how the consortium would react to losing one member.

They found that in consortia of non-engineered bacteria the knocked down strain did not recover, while in consortia of engineered bacteria both S. typhimurium and B. theta regrew to their normal levels after knockdown. Neither E. coli nor B. fragilis was able to recover after knockdown, and the loss of B. fragilis caused the whole consortium to grow to only half its normal size.

The researchers also found that the consortia of engineered bacteria displayed greater evenness—roughly similar amounts of each species—than non-engineered consortia, both in vitro and when the consortia were inoculated into the guts of bacteria-free mice. This trend was also present when the bacteria were grown in low-amino-acid environments, indicating that the engineered bacteria were successfully able to cross-feed each other amino acids to create a stable community.

“As expected in a complex network of species, not all of the bacterial strains interacted with each other equally; the engineered E. coli and S. typhimurium seem to ‘mooch’ off of the Bacteroides species without providing as much of a benefit back to the other members, so future research could focus on optimizing how much each species overproduces its given amino acid and consumes others, to improve the overall fitness of the consortium without compromising species evenness,” said co-corresponding author Pamela Silver, the Elliot T. and Onie H. Adams Professor of Biochemistry and Systems Biology in the Blavatnik Institute at HMS and a core faculty member at the Wyss.

Other potential directions for this research include introducing cascades of interactions  so that each bacterial strain takes in a compound from another strain, modifies it and passes it on to another strain for further processing to create a more efficient bioproduction assembly line to create chemicals of pharmaceutical or industrial interest.

“We’re ultimately interested in rationally designing consortia of beneficial bacteria that can function in complex environments, including the human gut, for medical applications.

Introducing ‘friendly’ interactions among bacteria is an important step toward being able to control these consortia so that that don’t exhibit overgrowth behaviors or losses of species needed to carry out their intended functions,” said co-corresponding author Georg Gerber, HMS assistant professor of pathology, chief of computational pathology and co-director of the Massachusetts Host-Microbiome Center at Brigham and Women’s.

“Being able to convert one type of bacterial consortium into another stable community is one of the major challenges in microbiome-related medicine today, and this work by Pam Silver and her collaborators represents a major first step toward developing ways to engineer this switch in a controlled way,” said Wyss Founding Director Donald Ingber, who is the HMS Judah Folkman Professor of Vascular Biology at Boston Children’s Hospital and professor of bioengineering at the Harvard John A. Paulson School of Engineering and Applied Sciences.

Additional authors of the paper include Jeffrey Way of HMS and the Wyss; John Oliver, Andrew Shumaker and David Riglar, formerly of the Wyss; Tobias Giessen, formerly of HMS; Bryan Hsu of HMS; and Travis Gibson, Nicholas DiBenedetto and Lynn Bry from HMS and the Massachusetts Host-Microbiome Center at Brigham and Women’s.

This research was supported by DARPA, the National Institutes of Health, the Harvard Digestive Diseases Center and the Wyss.