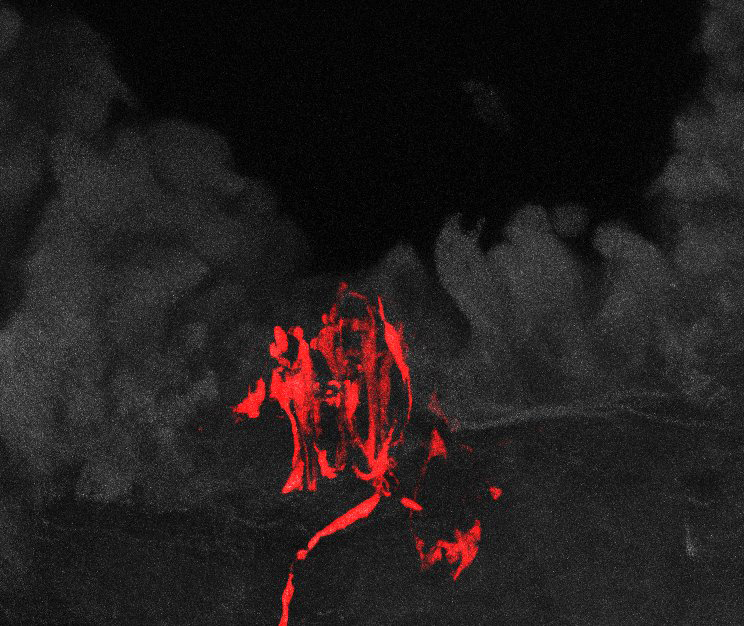 A sensory neuron (red) in lung tissue (gray) is one of two types of neurons in the mouse vagus nerve that control breathing. Image: Liberles lab

A sensory neuron (red) in lung tissue (gray) is one of two types of neurons in the mouse vagus nerve that control breathing. Image: Liberles lab

A nerve neglected in today’s era of molecular and genetic analysis has yielded a surprising secret. A handful of neurons control breathing in a fine-tuned but powerful way, scientists have discovered in mice. Among these sensory neurons, two types are dedicated to two specific respiratory functions.

The team, led by Stephen Liberles, Harvard Medical School associate professor of cell biology, has effectively deconstructed the vagus nerve, a key connection between body and brain that is important because it controls not only breathing but also heart rate, feeding behavior and responses to illness.

Using genetic tools to activate these two neuron types with light, the scientists found that stimulating one neuron type caused mice to stop breathing completely, trapping them in a state of exhalation. Activating the second neuron type made the mice take rapid, shallow breaths, as if they had inhaled some kind of irritant to their lungs, hinting at a pulmonary defense mechanism.

This research shows that because the vagus nerve is not one uniform structure, cutting or stimulating all of it to treat certain conditions may not be the best choice. Vagal nerve stimulation is nevertheless widely used clinically to treat a range of conditions, from epilepsy to mood to obesity. Targeting particular subsets electrically or pharmacologically may bypass clinical side effects.

In the early 20th century the vagus nerve was at the forefront of physiological research because of its importance and accessibility, Liberles said. But it has been nearly forgotten in the current era. At a cellular and molecular level, no one really knows how the vagus nerve detects different physiological stimuli, from the stretch of the stomach after a meal to toxins that induce nausea to changes in blood pressure.

Liberles comes from the world of receptors: His lab studies how receptors on sensory cells and their partner ligands control behavior related to smell and taste. Turning their attention to unraveling the vagus nerve, they applied the same approaches to studying internal sensory neurons that they had previously deployed to learn about external sensory neurons.

In mice, each vagus nerve contains about 2,500 sensory neurons, a small number for a structure that innervates the heart, lung, stomach and intestine and controls different functions in these different organs.

To reach that dramatic, "breath-taking" moment in the mouse experiment, cell biology postdoctoral research fellow Rui Chang and graduate student David Strochlic—co-first authors of the Cell paper—first had to combine anatomic and genetic methods. Strochlic started by screening the vagus nerve for sensory receptors. To do this he used an approach Liberles developed as a postdoctoral fellow in former HMS professor of neurobiology Linda Buck’s lab.

In the vagus nerve, Strochlic ranked the expression of G-protein-coupled receptors (GPCRs), known for their involvement in sensing and sending messages. He found some previously reported receptors and discovered others in small subsets of vagal sensory neurons.

“We hypothesized that the various physiological functions of the vagus nerve were being regulated by different small cohorts of these 2,500 neurons,” Strochlic said. “We found intermingled populations of neurons containing different receptors and thought they might be doing different things.”

Chang got a genetic foothold on this sensory system by labeling GPCRs in mice and engineering them to produce channelrhodopsin, a molecule that allowed the scientists to use light to manipulate the cells’ function and study the neurons sorted by different GPCRs.

They saw that two subpopulations of vagal neurons sent dense fiber projections into the lungs of the mice, but in different ways. One type fanned out into candelabra-like endings on the surface that lines the airways.  The other type terminated in smaller endings farther away from the main airways, inside tiny air sacs called the alveolar space.

The scientists also saw similarly divergent patterns in the brainstem.

“Not only were these neurons molecularly distinct, based on the GPCRs, but they also had very different anatomical projection patterns,” Strochlic said.

When the scientists activated all the sensory neurons—not just the two subtypes—they saw strong effects on heart rate and gastric pressure. But activating only the neurons that made the mice stop breathing didn’t change heart rhythm or gastric pressure.

“This is specific to respiration control,” Chang said.

Their results support the idea that certain neurons are dedicated to particular functions, which could have implications for therapies to treat asthma, epilepsy, heart dysfunction and obesity. But first, many other questions need to be answered. What are the neurons responding to? How are they detecting these stimuli?

“The respiratory system is just one system,” Liberles said. “We'd love to find neurons that control feeding behavior, control nausea, control heart rate. That’s going to keep us busy for some time delineating the neurons and then figuring out how they work.”

The work was supported by a National Science Foundation predoctoral fellowship, an F30 National Institutes of Health training grant, and the Harvard-MIT Joint Research Grants Program in Basic Neuroscience.