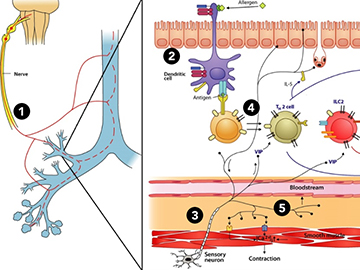 A vicious cycle of neuro-immune signaling in asthma.

A vicious cycle of neuro-immune signaling in asthma.

Current asthma medications, which work by suppressing inflammatory signaling by immune cells or by dilating the airways, can stop working over time.

Reporting online June 25 in Neuron, the researchers show that specialized sensory neurons called nociceptors not only are activated by allergic inflammation, but also exacerbate the allergic immune response. Selectively silencing these neurons in mouse models of acute and chronic asthma reduces both inflammation and bronchial twitchiness.

Nociceptors in our lungs connect to the brainstem and trigger the cough reflex when they detect potential harms like dust particles, chemical irritants or allergens. Nociceptor nerve endings are known to be more plentiful and more readily activated in people with asthma, but scientists hadn’t previously suspected that they play a role in driving allergic inflammation.

“An attractive aspect of targeting nociceptors is that this approach would be most effective when inflammation is already present and should accelerate its resolution,” said co-senior investigator Clifford Woolf, director of the F.M. Kirby Neurobiology Center at Boston Children’s and HMS professor of neurology at Boston Children’s.

“Current asthma treatments can help to control symptoms and dampen airway inflammation; however, therapies are not available to promote the resolution of asthma,” said co-senior investigator Bruce Levy, HMS professor of medicine and chief of the Pulmonary and Critical Care Medicine Division at Brigham and Women’s. “A treatment to interrupt the vicious cycle of neuro-immune signaling holds promise as a disease-modifying therapy and is mechanistically distinct from any of the currently available asthma therapies.”

The research team, led by first author Sébastien Talbot, HMS research fellow in neurology at Boston Children’s, tested a strategy for selectively blocking nociceptor activity in mice that was developed by the Woolf lab in conjunction with Bruce Bean, the HMS Robert Winthrop Professor of Neurobiology, using a drug called QX-314.

“There was prior evidence that neurons and the immune system talk to each other,” said Talbot. “Since we have QX-314, which specifically blocks pain neurons that are activated by inflammation, we wanted to see if such interplay also occurs in asthma.”

In the study, the researchers induced asthma in mice by exposing them to dust mites or another allergen called ovalbumin, then administered QX-314 via nebulizer to silence the nociceptors. These were their findings:

The researchers concluded that nociceptors both react to and drive inflammatory immune responses in the lung, and that silencing these cells interrupts this feedback loop, helping relieve allergic airway inflammation and bronchospasm.

QX-314 is chemically related to the local anesthetic lidocaine, modified in such a way that it specifically targets inflammation-activated nociceptors (including those in the lung) and stays inside cells for prolonged periods without getting into the bloodstream. The researchers believe these properties will increase the drug’s duration of action in the lung and limit side effects.

“QX-314 is not able to get into nerve cells normally, but it can enter cells by passing through the large pores of TRP-family ion channels, which are expressed selectively in nociceptors and are activated during inflammation,” explained Bean. “This limits the action of QX-314 to just the neurons activated by inflammation.”

“People have tried to use lidocaine itself to target asthma, but it works nonspecifically on all neurons, posing a risk of impaired swallowing,” said Talbot. “It can also spread to and act on the heart and brain.”

With the help of the Harvard and Boston Children’s technology development offices, the Woolf and Bean labs are working on new, more potent versions of QX-314 that would enhance its safety but preserve and even increase its beneficial properties.

“We are sufficiently encouraged by the strong relief of lung inflammation and airway constriction to actively embark on a major drug development program, with the aim of clinically testing this strategy for multiple allergic conditions,” Woolf said.