Getting to the root of sex-based differences in disease risk 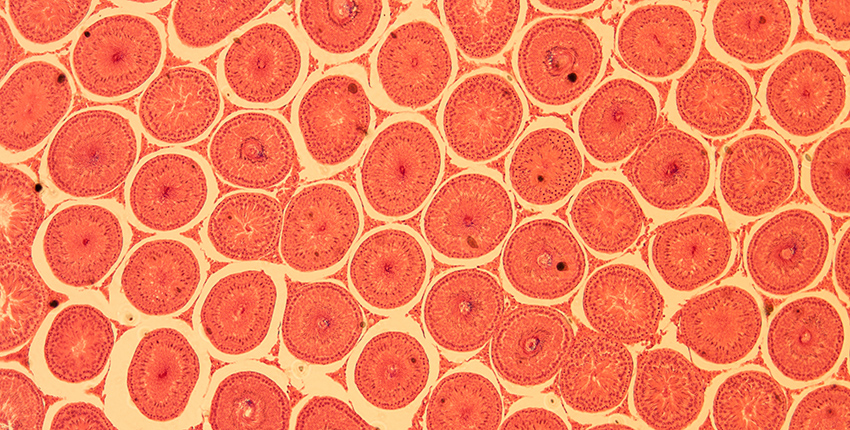 A microscopic view of human testis tissue. A new study helps explain why men are more likely to get bladder cancer than women. Image: defun/iStock

Li and Kaneko started by uncoupling the genomic and hormonal components of sex in a mouse model of bladder cancer.

Over a period of 280 days, they found that mice with XY chromosomes—even those with ovaries instead of testes—were much more likely to develop and die from bladder cancer than their XX counterparts.

Strikingly, mice born with testes, regardless of being XX or XY individuals, were even more likely to die.

To better understand the genetic mechanisms behind these stark observations, Li and Kaneko decided to sequence urothelial cells, which line the urinary tract and are the most common source of bladder cancer, from the four groups of mice.

They landed an interesting genetic hit.

Expression of an X-chromosome-linked gene called KDM6A stuck out from the pack as a key differentiator between XY and XX urothelial cells, regardless of whether the mice had ovaries or testes. They found much more KDM6A expression in individuals with XX chromosomes.

In humans, KDM6A is a known factor in some breast cancers but seems to suppress tumor growth in T cell acute lymphoblastic leukemia.

Li and Kaneko then tested bladder cancer cells to see if expression of KDM6A—either constantly or transiently on or off—would influence the ability of the cancer cells to proliferate over time.

They found that constant expression of KDM6A significantly repressed cell growth. Moreover, they found that knocking out the gene in urothelial cells increased bladder cancer risk in mice.

Together, these findings suggest that KDM6A functions as a tumor suppressor in bladder cancer, the authors said.

With these mouse model findings in hand, Li and Kaneko then wondered if there was any evidence of KDM6A influencing the outcomes of human patients with bladder cancer.

Finding a hit in clinical data

“We have found that the X chromosome offers protection from bladder cancer and that X-linked KDM6A confers additional benefit by acting as a tumor suppressor,” said Li, who is a principal investigator in the urology department at Boston Children’s.

Taken altogether, Li and Kaneko’s findings provide new insight into sex-based disparities in cancer risk and mortality. They further suggest that X-chromosome-linked KDM6A is potential new biomarker that can predict prognosis for patients with bladder cancer and could even set the stage for future therapies.