Birding Their Way to the Clinic 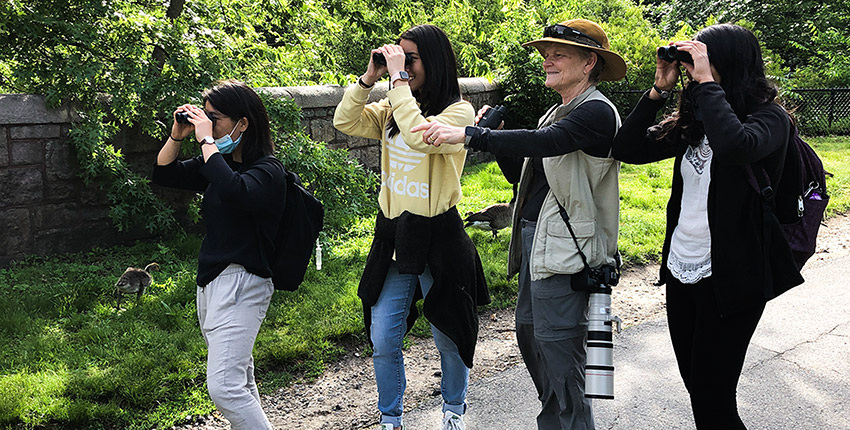 Rose Goldman (center right) points out a bird to Practice of Medicine students (from left) Lynn Hur, Sherry Yang, and Laboni Hoque while birding at Olmsted Park in Boston in May 2021.

How does a first-year medical student learn to distinguish between two likely causes of a patient’s shortness of breath?

By using a method similar to one birders use, believes Rose Goldman, Harvard Medical School associate professor of medicine at Cambridge Health Alliance.

“Finding those differentiating features to get to a medical diagnosis is similar to looking at a bird’s characteristics and behavior to get to an identification,” Goldman said.

Pathways to the Future of Medicine

In a new curriculum program this year, entering HST students had the opportunity to meet patients first

Goldman, who has been a physician for 45 years and has enjoyed birding for nearly 20, was so struck by the similarity that she incorporated a brief bird identification lesson into the HMS Practice of Medicine, or POM, course.

The lesson introduces differential diagnosis in clinical decision-making and offers a way for medical students to practice their skills of observation and pattern recognition.

The idea came to Goldman about six years ago, when she was helping to develop the POM course for the HMS Pathways curriculum—a new flipped-classroom model where first-year students begin learning how to interview and examine patients from the first week of medical school, rather than after a year of science and anatomy courses and labs.

The challenge, Goldman said, was teaching the students how to make a differential diagnosis when they did not yet have an established base of scientific or medical knowledge and were not well versed in the multitude of illnesses that could cause a patient’s symptoms.

She presents the students with photos of two white birds that are found near water and asks them to list the birds’ attributes, such as their comparative size; the shapes and lengths of their necks, legs, and bodies; and the colors of their beaks, eyes, feathers, legs, and feet.

Then, Goldman asks the students to apply similar reasoning to the patient experiencing breathlessness. She said the class considers the symptomatic evidence and which characteristics “point to a pulmonary problem, like asthma, versus a cardiac etiology, like angina or congestive heart failure.”

Each year, some students express interest in going out into the field, said Goldman. So she added an optional field component that allows them to get out into nature, bond with one another outside of classes and the clinic, and hone their observation skills.

The skills students gain from birding can help them be more present and observant with patients, Goldman said. In the POM course, “We stress the importance of observation—observing our patients visually and listening carefully to their story,” Goldman said.

Birding was a new experience for POM students Laboni Hoque, Lynn Hur, and Sherry Yang. Curiosity about how learning bird identification could apply to learning medicine drew them in.

“I was wondering how [Goldman] was going to connect the two,” said Hoque, who as a first-year student welcomed any extra help in learning clinical skills.

“Finding patterns was something that I didn’t recognize as important until I actually learned more about the clinical side of things,” said Yang. As she has become more observant outdoors, Yang said she has grown more intentional in the clinic about checking for signs of illness and asking patients about their symptoms.

Students also learn that it sometimes takes teamwork to identify a bird. Each person has a different perspective, the students found, and by sharing the characteristics they notice and consulting their field guide, they can arrive at an answer.

This is similar to how a health care team shares information, forms a hypothesis, consults medical guides, and comes to a consensus on a diagnosis, Yang said. “That has taught me to lean on my teammates both in the birding setting and in the clinical setting … to help each other out for the same mutual goal.”

While birding isn’t for everyone, Goldman does believe it’s an effective teaching method that has additional mental health and social benefits. Other evidence supports her hypothesis. In a recent Perspective piece, “When Sparks Fly—Or How Birding Beat My Burnout,” in the New England Journal of Medicine, a doctor in New Jersey discussed how birding has helped relieve his burnout, and the Massachusetts Medical Society has begun running member birding trips.

Hur says that for her and her classmates, birding provides a respite from computers, the pressures and structured schedule of medical school, and this year, the stresses of the pandemic.

“Having school start off as a virtual experience was really difficult,” Yang said. She and her classmates welcomed the chance to meet in person. She found that “there is a lot of fellowship” among birders.

“The mindfulness that comes with being outdoors, the spontaneity of each sighting, and the true appreciation of avian beauty makes bird-watching something I want to actively pursue with my classmates,” said Hur. And she has set up a messaging channel for medical students to share bird observations and connect for outings.

“I feel like I'm never so present as when I'm birding, when I'm with a patient, or when I’m teaching,” Goldman said.