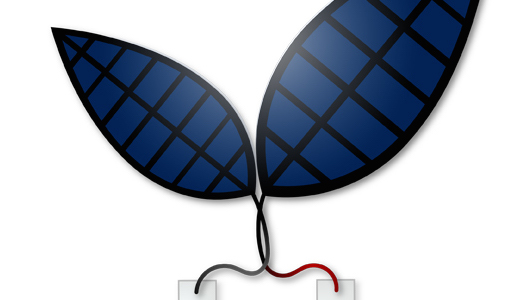 Harvesting sunlight is a trick plants mastered more than a billion years ago, using solar energy to feed themselves from the air and water around them in the process we know as photosynthesis.

Scientists have also figured out how to harness solar energy, using electricity from photovoltaic cells to yield hydrogen that can be later used in fuel cells. But hydrogen has failed to catch on as a practical fuel for cars or for power generation in a world designed around liquid fuels.

Now scientists from a team spanning Harvard University’s Faculty of Arts and Sciences, Harvard Medical School and the Wyss Institute for Biologically Inspired Engineering have created a system that uses bacteria to convert solar energy into a liquid fuel.

Their work integrates an “artificial leaf,” which uses a catalyst to make sunlight split water into hydrogen and oxygen, with a bacterium engineered to convert carbon dioxide plus hydrogen into the liquid fuel isopropanol.

The findings are published Feb. 9 in PNAS. The co-first authors are Joseph Torella, a recent PhD graduate from the HMS Department of Systems Biology, and Christopher Gagliardi, a postdoctoral fellow in the Harvard Department of Chemistry and Chemical Biology.

Pamela Silver, the Elliott T. and Onie H. Adams Professor of Biochemistry and Systems Biology at HMS and an author of the paper, calls the system a bionic leaf, a nod to the artificial leaf invented by the paper’s senior author, Daniel Nocera, the Patterson Rockwood Professor of Energy at Harvard University.

“This is a proof of concept that you can have a way of harvesting solar energy and storing it in the form of a liquid fuel,” said Silver, who is a founding core faculty member of the Wyss. “Dan’s formidable discovery of the catalyst really set this off, and we had a mission of wanting to interface some kinds of organisms with the harvesting of solar energy. It was a perfect match.”

Silver and Nocera began collaborating two years ago, shortly after Nocera came to Harvard from MIT. They shared an interest in “personalized energy,” or the concept of making energy locally, as opposed to the current system, which in the example of oil means production is centralized and then sent to gas stations. Local energy would be attractive in the developing world.

“It’s not like we’re trying to make some super-convoluted system,” Silver said. “Instead, we are looking for simplicity and ease of use.”

In a similar vein, Nocera’s artificial leaf depends on catalysts made from materials that are inexpensive and readily accessible.

“The catalysts I made are extremely well adapted and compatible with the growth conditions you need for living organisms like a bacterium,” Nocera said.

In their new system, once the artificial leaf produces oxygen and hydrogen, the hydrogen is fed to a bacterium called Ralstonia eutropha. An enzyme takes the hydrogen back to protons and electrons, then combines them with carbon dioxide to replicate—making more cells.

Next, based on discoveries made earlier by Anthony Sinskey, professor of microbiology and of health sciences and technology at MIT, new pathways in the bacterium are metabolically engineered to make isopropanol.

“The advantage of interfacing the inorganic catalyst with biology is you have an unprecedented platform for chemical synthesis that you don’t have with inorganic catalysts alone,” said Brendan Colón, a graduate student in systems biology in the Silver lab and a co-author of the paper. “Solar-to-chemical production is the heart of this paper, and so far we’ve been using plants for that, but we are using the unprecedented ability of biology to make lots of compounds.”

The same principles could be employed to produce drugs such as vitamins in small amounts, Silver said.

The team’s immediate challenge is to increase the bionic leaf’s ability to translate solar energy to biomass by optimizing the catalyst and the bacteria. Their goal is 5 percent efficiency, compared to nature’s rate of 1 percent efficiency for photosynthesis to turn sunlight into biomass.

“We’re almost at a 1 percent efficiency rate of converting sunlight into isopropanol,” Nocera said. “There have been 2.6 billion years of evolution, and Pam and I working together a year and a half have already achieved the efficiency of photosynthesis.”