Scientists have isolated a new type of energy-burning fat cell in adult humans, which they say may have therapeutic potential for treating obesity.

Called “beige fat,” the cells are found in scattered pea-sized deposits beneath the skin near the collarbone and along the spine in adult humans. Because this type of fat can burn off calories – rather than store them, as “white fat” cells do – beige fat cells might spawn new therapies for obesity and diabetes, according to researchers led by Bruce Spiegelman, Stanley J. Korsmeyer Professor of Cell Biology and Medicine at Harvard Medical School and Dana-Farber Cancer Institute.

Spiegelman is the senior author of a report published online July 12 in Cell. 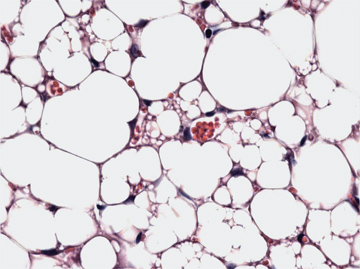 The study found that beige fat is genetically distinct from “brown fat,” which also burns calories to generate heat. Brown fat is found in small mammals and human infants, where it protects against harm from cold. White fat, on the other hand, stores calories, and excess white fat contributes to obesity.

Existence of this third type of fat (in addition to white and brown) had been proposed in a paper by Spiegelman’s lab in 2008, but this team is the first to isolate it and to determine its unique genetic profile. In the new report, Spiegelman’s group, led by research fellow Jun Wu, also found that beige cells are specifically targeted by the hormone irisin, which muscle cells express during exercise.

In 2009, three research groups reported that the deposits found in adult humans contained brown fat, but the new research has identified them as beige fat by their genetic makeup.

“Going forward, it means that what you want to study for potential therapies are the beige fat cells in these ‘hotspots’ we’re all walking around with,” said Spiegelman.

Even in small amounts, brown and beige fat can burn large amounts of calories.

“The therapeutic potential of both kinds of brown fat cells is clear,” the authors write, “as genetic manipulations in mice that create more brown or beige fat have strong anti-obesity and anti-diabetic actions.”  Researchers are already seeking ways to exploit human brown fat for human benefits.

Both types of fat contain energy-burning organelles called mitochondria, which contain iron and are the cause of the brown and beige hues. A key difference is that brown fat cells express high levels of UCP1 – a protein required by mitochondria to burn calories and generate heat – while beige cells normally express low levels of it. Beige cells can, however, turn on high levels of UCP1 in response to cold or certain hormones like irisin, enabling beige fat to burn calories nearly as effectively as brown fat. 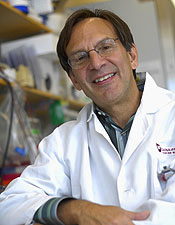 Spiegelman has published a series of discoveries about the different fat cell types. Brown fat cells, he found, are born from stem cell precursors that also produce muscle cells. Beige fat, however, forms within deposits of white fat cells from beige cell precursors.

Earlier this year, he reported the discovery of irisin, produced by muscular exercise, and which can convert white fat to brown fat. In the new report, Spiegelman says that irisin specifically stimulates white fat to produce beige fat. Dana-Farber has licensed both discoveries to Ember Therapeutics, a biotech company founded by Spiegelman, which plans to develop irisin as a therapy for obesity and diabetes.

The research was supported, in part, by grants from the National Institutes of Health (DK31405 and DK90861) and the American Heart Association.

Spiegelman is a shareholder of and consultant to Ember Therapeutics.