Back to the Beginning

Harvard Medical School researchers at Boston Children’s Hospital explain in a new paper how brain connections, or synapses, are lost early in Alzheimer’s disease. They also show that the process starts before telltale plaques accumulate in the brain.

Led by senior author Beth Stevens, HMS assistant professor of neurology in the F.M. Kirby Neurobiology Center at Boston Children’s, and first author Soyon Hong, HMS research fellow in neurology at Boston Children’s, the researchers show in multiple mouse models of Alzheimer’s that mechanisms similar to those used to prune excess synapses in the healthy developing brain are wrongly activated later in life.

By blocking these mechanisms, the researchers were able to reduce synapse loss in the mice.

Currently, there are five FDA-approved drugs for Alzheimer’s, but these only boost cognition temporarily and do not address the root causes of cognitive impairment in Alzheimer’s. Many newer drugs in the pipeline seek to eliminate amyloid plaque deposits or reduce inflammation in the brain, but the new study suggests that Alzheimer’s could be targeted much earlier, before these pathologic changes occur.

“Synapse loss is a strong correlate of cognitive decline,” said Stevens, who recently received a MacArthur “genius” award. “We’re trying to go back to the very beginning and see how synapse loss starts.”

The young brain informing the old

Stevens, Hong and colleagues looked at Alzheimer’s through an unusual lens: normal brain development in infancy and childhood. Through years of research, the Stevens lab has shown that normal developing brains have a process to prune synapses that aren’t needed as they build their circuitry.

“Understanding a normal developmental process deeply has provided us with novel insight into how to protect synapses in Alzheimer’s and potentially a host of other diseases,” said Stevens, noting that synapse loss also occurs in frontotemporal dementia, Huntington’s disease, schizophrenia, glaucoma and other conditions.

In the Alzheimer’s mouse models, the team showed that synapse loss requires the activation of a protein called C1q, which tags synapses for elimination. Immune cells in the brain called microglia then “eat” the synapses—similar to what occurs during normal brain development. In the mice, C1q became more abundant around vulnerable synapses before amyloid plaque deposits could be observed. 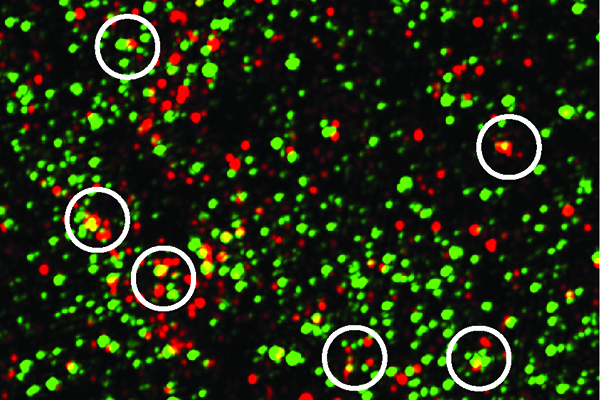 When Stevens and colleagues blocked C1q, a downstream protein called C3, or the C3 receptor on microglia, synapse loss did not occur.

“Microglia and complement are already known to be involved in Alzheimer’s disease, but they have been largely regarded as a secondary event related to plaque-related neuroinflammation, a prominent feature in progressed stages of Alzheimer’s,” said Hong. “Our study challenges this view and provides evidence that complement and microglia are involved much earlier in the disease process, when synapses are already vulnerable, and could potentially be targeted to preserve synaptic health.”

A human form of the antibody Stevens and Hong used to block C1q, known as ANX-005, is in early therapeutic development with Annexon Biosciences (San Francisco) and is being advanced into the clinic. The researchers believe it has potential to be used someday to protect against synapse loss in a variety of neurodegenerative diseases.

Annexon co-founders Ben Barres and Arnon Rosenthal are coauthors on the paper. Barres, Rosenthal and Stevens are minor shareholders of Annexon LLC and Stevens is a member of its scientific advisory board.

“One of the things this study highlights is the need to look for biomarkers for synapse loss and dysfunction,” said Hong. “As in cancer, if you treat people at a later stage of Alzheimer’s, it may already be too late.”

Together with co-author Dennis Selkoe, the HMS Vincent and Stella Coates Professor of Neurologic Diseases in the Department of Neurology at Brigham and Women’s Hospital, the researchers also found that that beta-amyloid protein, C1q and microglia work together to cause synapse loss in the early stages of Alzheimer’s.

The oligomeric form of beta-amyloid (multiple units of beta-amyloid strung together) was already known to be toxic to synapses even before it forms plaque deposits, but the study showed that C1q is necessary for this effect. The converse was also true: Microglia engulfed synapses only when oligomeric beta-amyloid was present.