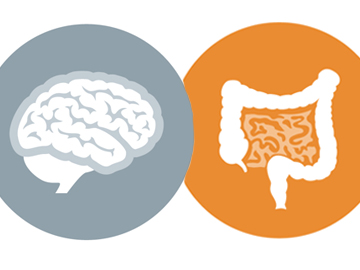 Reports from parents and a growing number of studies over the past 10 to 15 years suggest that children with autism spectrum disorder (ASD), especially more severe ASD, are prone to gastrointestinal disorders.

Researchers have attributed the association to altered GI microbiota, abnormal intestinal physiology, immune alterations and other mechanisms. Some speculate that the connection results from unusual eating patterns in children with ASD.

A 2012 study led by bioinformatician Isaac Kohane, inaugural chair of the Department of Biomedical Informatics at Harvard Medical School and the Lawrence J. Henderson Professor of Pediatrics at Boston Children’s Hospital, grouped patients with autism according to the gene expression patterns in their blood. One group had altered immunologic and inflammatory pathways.

A more recent study from a different research team went a step further, finding similar gene expression profiles in the intestines of children with ASD and those with inflammatory bowel disease (IBD).

Looking at IBD, which includes Crohn’s disease and ulcerative colitis, set the bar a little higher, since it is uncommon in children and also unlikely to be caused by dietary factors (though it can certainly be aggravated by them).

In a new study in Inflammatory Bowel Diseases, Kohane and colleagues crunched three large databases to create what they believe is the largest ASD/IBD study to date. Specifically, they tapped:

All patients were born after 1970 and saw a health care provider on at least three occasions. Mean ages in this study ranged from 9 to 13½ years, depending on the sample.

Based on data from Aetna and the two hospitals, the overall age-adjusted prevalence of IBD per 100,000 patients, followed by its 95 percent confidence interval, was:

The differences were statistically significant except for the Wake Forest database, which was smaller and thus had wider confidence intervals.

A deeper dive into the Boston Children’s data showed that children with both IBD and ASD had a higher prevalence of rheumatoid arthritis and asthma than those with ASD alone.

There are a few things to keep in mind. Because IBD is uncommon in children, actual patient numbers were small: There were just seven expert-verified cases among 2,728 ASD patients in the Simons Simplex population and 16 of 7,201 Boston Children’s ASD patients, a prevalence of 0.2-0.3 percent. The analyses relied mainly on ICD-9 diagnostic codes, rather than on detailed chart review. And the databases had limitations; for example, Aetna data were available for only 2009 to 2013, and Boston Children’s is known for both ASD and IBD treatment, which may have skewed the numbers higher.

Finally, the study says nothing about the reasons for the association between IBD and ASD. As the researchers state, “molecular and microbiome characterizations will be needed to determine whether IBD and ASD do indeed share common etiologies.”

At a minimum, the study is expected to encourage more research exploring the gut-brain connection and different subtypes of autism.

“For years, many parents have told us that their children with ASD have severe abdominal pain and gastrointestinal symptoms,” said Kohane.

“From these population studies, larger than any to date, we find solid and reproducible evidence that the parents were right—as usual,” he said. “Based on the data I’ve seen, I suspect we will soon be able to define several distinct subtypes of ASD-associated bowel diseases.”

Finale Doshi-Velez of Harvard University’s School of Engineering and Applied Science was first author on the paper.