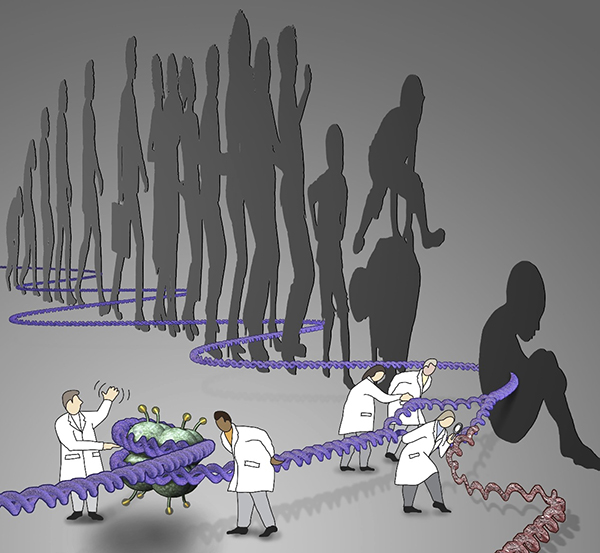 Small regions of the genome where humans have diverged from chimpanzees contain a variety of mutations implicated in autism and other neurodevelopmental disorders, report Harvard Medical School researchers at Boston Children’s Hospital.

Published online Sept. 22 in Cell, the genomic analysis—the most comprehensive of its kind to date—opens a new approach to understanding both cognitive/behavioral disorders and the still-mysterious genetic changes that made human language, culture and civilization possible.

In the last decade, comparative genomic studies have identified small regions of the human genome that are shared with many species but that changed relatively rapidly during the evolutionary divergence of humans from chimpanzees, our closest living relatives. There are about 2,700 such sequences in the genome, known as human accelerated regions or HARs.

“Since human intellectual and social behaviors are so different from other species, many labs have figured that changes in HARs might be important in the evolution of these traits in humans,” said neurogeneticist Christopher A. Walsh, HMS Bullard Professor of Pediatrics and Neurology at Boston Children’s and senior author of the Cell paper.

“But we hypothesized that if important HARs were damaged, it might also cause defective human social and/or cognitive behavior,” said Walsh, who is also chief of the Division of Genetics and Genomics at Boston Children’s and a Howard Hughes Medical Institute investigator. “We found that this is indeed the case.”

Altered gene regulators in the brain

In addition to protein-coding genes, they surveyed noncoding DNA sequences, which regulate gene activity, and tried to identify which genes these sequences regulate. They also looked for evidence of HAR activity in the brain.

“We found that most HAR regions contain enhancer or regulatory DNA,” said Doan. “More than 40 percent of those HARs had some sort of regulatory activity in the brain—much more than we would expect by chance.”

In all, the investigators identified about two dozen mutations in HARs that appear to have important roles in brain structure and function. Some HARs, for example, contained regions regulating neurodevelopmental processes that have diverged between humans and chimpanzees, such as synapse development.

The researchers then looked at genomic sequence data from 2,100 American children with autism spectrum disorder from the Simons Simplex Collection.

They found that these children were 6.5 times more likely than healthy siblings to harbor a de novo (noninherited) duplication or deletion of a HAR. In all, they estimated that these mutations within HARs contributed to 1-2 percent of the autism spectrum disorder cases by giving children too much or too little of the gene or regulator.

“This work brings together the study of evolution and the study of neurological disease.” --Christopher A. Walsh

The team also looked at children with autism spectrum disorder from 218 Middle Eastern families in which parents were related to each other, usually as first cousins, increasing the likelihood of recessive disorders.

“We know from animal models that intensive environmental stimulation can increase gene expression, and that intensive training is often helpful for children on the autism spectrum,” he said. “Noncoding sequences control levels of gene expression, which suggests that a lot of the gene is still good—if there were just a way to turn it on.”

But the evolutionary implications of the study are what most fascinate Walsh and his colleagues.

“This work brings together the study of evolution and the study of neurological disease,” said Walsh. “Studying the kinds of mutations in HARs that cause neurodevelopmental disorders like autism spectrum disorder may tell us about the sorts of changes that led to us having a different brain than other animals’. Chimps are social creatures, but they’re different from humans. They don’t live in compact cities of a million people. That requires extraordinary social behavior.”