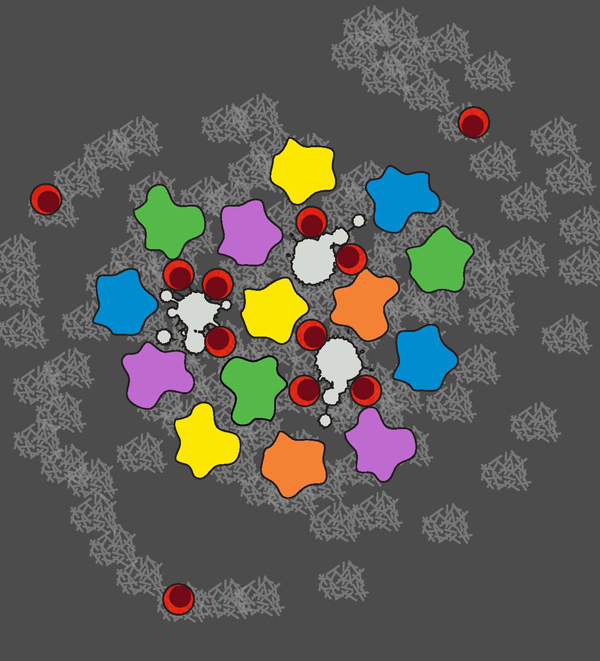 A novel screening method developed by a team at Harvard Medical School and Dana-Farber/Boston Children’s Cancer and Blood Disorders Center—using CRISPR-Cas9 genome editing technology to test the function of thousands of tumor genes in mice—has revealed new drug targets that could potentially enhance the effectiveness of PD-1 checkpoint inhibitors, a promising new class of cancer immunotherapy.

In findings published online today by Nature the Dana-Farber/Boston Children’s team, led by pediatric oncologist W. Nick Haining, reports that deletion of the PTPN2 gene in tumor cells made them more susceptible to PD-1 checkpoint inhibitors. PD-1 blockade is a drug that “releases the brakes” on immune cells, enabling them to locate and destroy cancer cells.

“PD-1 checkpoint inhibitors have transformed the treatment of many cancers,” said Haining, HMS associate professor of pediatrics at Dana-Farber/Boston Children’s, associate member of the Broad Institute of MIT and Harvard, and senior author on the new paper. “Yet despite the clinical success of this new class of cancer immunotherapy, the majority of patients don’t reap a clinical benefit from PD-1 blockade.”

That, Haining said, has triggered a rush of additional trials to investigate whether other drugs, when used in combination with PD-1 inhibitors, can increase the number of patients whose cancer responds to the treatment.

“The challenge so far has been finding the most effective immunotherapy targets and prioritizing those that work best when combined with PD-1 inhibitors,” Haining said. “So, we set out to develop a better system for identifying new drug targets that might aid the body’s own immune system in its attack against cancer.

“Our work suggests that there’s a wide array of biological pathways that could be targeted to make immunotherapy more successful,” Haining continued. “Many of these are surprising pathways that we couldn’t have predicted. For instance, without this screening approach, it wouldn’t have been obvious that PTPN2 is a good drug target for the immunotherapy of cancer.”

Sifting through thousands of potential targets

To cast a wide net, the paper’s first author Robert Manguso, a graduate student in Haining’s lab, designed a genetic screening system to identify genes used by cancer cells to evade immune attack. He used CRISPR-Cas9, a genome editing technology that works like a pair of molecular scissors to cleave DNA at precise locations in the genetic code, to systematically knock out 2,368 genes expressed by melanoma skin cancer cells. Manguso was then able to identify which genes, when deleted, made the cancer cells more susceptible to PD-1 blockade.

Manguso started by engineering the melanoma skin cancer cells so that they all contained Cas9, the cutting enzyme that is part of the CRISPR editing system. Then, using a virus as a delivery vehicle, he programmed each cell with a different single-guide-RNA (sgRNA) sequence of genetic code. In combination with the Cas9 enzyme, the sgRNA codes—about 20 amino acids in length—enabled 2,368 different genes to be eliminated.

By injecting the tumor cells into mice and treating them with PD-1 checkpoint inhibitors, Manguso was then able to tally up which modified tumor cells survived. Those that perished had been sensitized to PD-1 blockade as a result of their missing gene.

Using this approach, Manguso and Haining first confirmed the role of two genes already known to be immune evaders—PD-L1 and CD47, drug inhibitors that are already in clinical trials. They then discovered a variety of new immune evaders that, if inhibited therapeutically, could enhance PD-1 cancer immunotherapy. One such newly found gene of particular interest is PTPN2.

With the new screening approach in hand, Haining’s team is quickly scaling up their efforts to search for additional novel drug targets that could boost immunotherapy.

Haining says the team is expanding their approach to move from screening thousands of genes at a time to eventually being able to screen the whole genome and to move beyond melanoma to colon, lung, renal carcinoma and more. He’s assembled a large team of scientists spanning Dana-Farber/Boston Children’s and the Broad to tackle the technical challenges that accompany screening efforts on such a large scale.

In the meantime, while more new potential drug targets are likely around the corner, Haining’s team is taking action based on their findings about PTPN2.

“We’re thinking hard about what a PTPN2 inhibitor would look like,” said Haining. “It’s easy to imagine making a small molecule drug that turns off PTPN2.”

This work was supported by the Broad Institute of Harvard and MIT (BroadIgnite and Broadnext10 awards) and the National Institute of General Medical Sciences (T32GM007753).