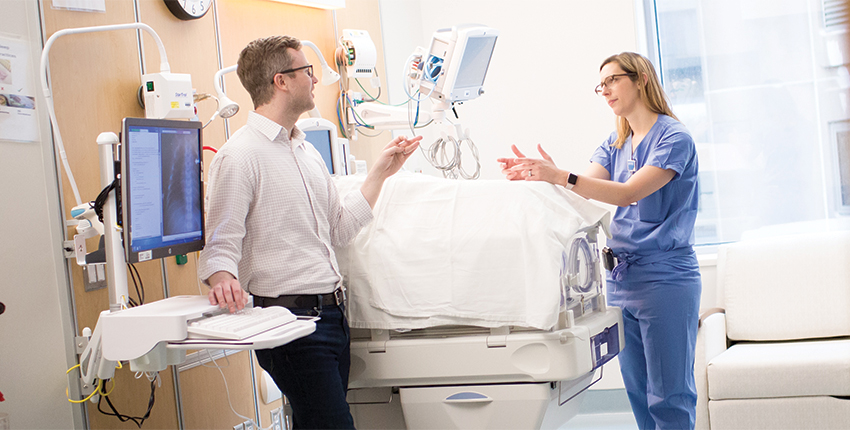 As an undergraduate computer science major, Andrew Beam had mapped out his professional life: Make it big in Silicon Valley as a systems engineer for a software giant. But in his junior year, he took an artificial intelligence course and his direction changed.

“It was the coolest thing—an awesome mix of philosophy, mathematics and computer science,” Beam said. “We pondered really fundamental questions about humanity and intelligence—everything to make an undergrad go ‘Whoa, dude!’”

While pursuing his doctorate in informatics, he met a medical student who would become his wife. Watching her go through training, Beam had profound insights: Evidence is often outdated, and physicians are overworked. It can be difficult at times to reason under uncertainty or calculate probability and analyze statistics with confidence while under pressure.

“It was slap-you-in-the-face obvious that AI was going to have a tremendous impact on health care,” he said.

Today, Beam is an instructor in biomedical informatics at Harvard Medical School, where he develops data-driven models that will improve decision making in health care. Although his current focus is neonatal and perinatal medicine—his wife, Kristyn Beam is clinical fellow in neonatology at Brigham and Women’s Hospital—the unifying theme of Beam’s work is creating AI systems capable of making sense of the avalanche of data spawned by research in a variety of clinical specialties over the past 20 years.

At the top of Beam’s to-do list: develop an artificial neural network capable of performing on a par with a second-year medical student. The long-term goal of this proto-med-student project, funded by the Robert Wood Johnson Foundation, is to evolve the system to the diagnostic level of a fourth-year medical student and make it capable of analyzing clinical scenarios and applying clinical reasoning.

Yet, early indicators are promising. Recent research demonstrated that diagnostic algorithms successfully used a constellation of telltale features in digital images of patients’ retinas to spot diabetic retinopathy, as well as or even better than ophthalmologists could.

“What AI is going to allow us to do—if we do it right—is enhance the accuracy and productivity of clinicians by serving as a focused-intelligence assistance or backup,” Kohane said. “But the need for the physician as a holistic thinker who understands both the medicine and the complexity of human life will never go away.”