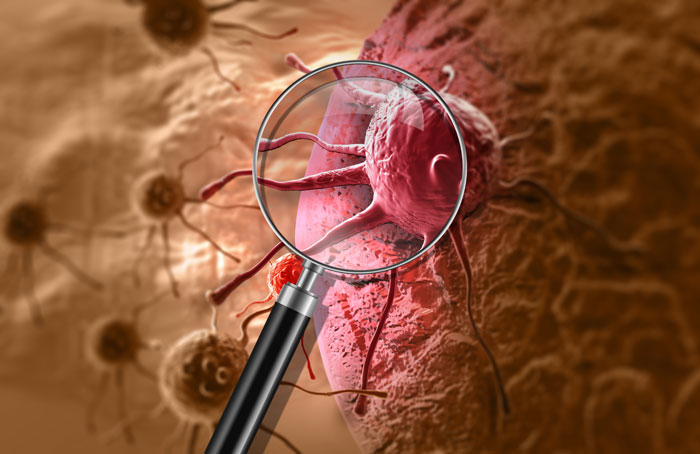 HMS scientists and colleagues from other institutions have found how the loss of a key protein unlocks the rise of aggressive rhabdoid cancers in children.
Photo Credit: Vitanovski, Getty Images

Rhabdoid tumors are among the most recalcitrant childhood cancers and scientists have long sought ways to understand what drives their resilience and makes them impervious to treatment.

Rhabdoid tumors typically start out in the kidneys, but they can also arise or migrate into the brain and other soft tissues. While rare—they account for less than 2 percent of pediatric kidney cancers—rhabdoid tumors are highly lethal with a survival rate of less than 25 percent.

The report of the multi-institutional team’s findings, published Dec. 12 in Nature Genetics, describes how the loss of a protein, SMARCB1, can disrupt the work of a regulatory mechanism, thereby fueling uncontrolled malignant cell proliferation and the continued survival of rhabdoid tumors.

The absence of SMARCB1 in rhabdoid tumor cells has been known for some time, so scientists suspected it played a role in cancer development. Yet, just how it did so remained somewhat of a puzzle.

The new findings provide the missing piece in that puzzle and reveal just how the absence of SMARCB1 unlocks a chain of events that culminates in the loss of cellular identity and profound aberrations in cell behavior.

SMARCB1 is a key component of a protein complex known as SWI/SNF, which largely acts as a tumor suppressor. SWI/SNF works by altering the packaging of genetic material inside a cell’s nucleus. Such alterations are important because they make DNA accessible to proteins that turn on gene expression, a fundamental way to regulate cell behavior and determine cell identity.

In addition, the team said, the results may have relevance for other forms of cancer.

“Mutations in the SWI/SNF complex occur in a broad range of human cancers so our findings may provide insight well beyond rhabdoid tumors,” said Charles Roberts, co-senior author and director of the Comprehensive Cancer Center at St. Jude.

The curious case of the mutation-free tumor

Throughout the past decade, advances in cancer genome sequencing have revealed cancer cells have very high rates of genetic mutations. This mutability turns tumors into shape-shifters capable of evading drug therapies. But, curiously, rhabdoid tumors are among the most genomically stable and least mutable of cancers, harboring only a few genetic mutations, compared with the hundreds or thousands of mutations in other cancers. So what exactly makes these immutable tumors so pernicious, the researchers wondered?

Based on the study’s findings, the answer appears to lie—literally—outside of the tumor cell’s DNA and in its epigenome—the separate layer of proteins and chemical modifiers that sits atop DNA and can profoundly alter its behavior.

The insights illuminate a critical survival mechanism that allows rhabdoid tumors to escape the body’s checks and controls.

In a series of experiments with patient-derived rhabdoid tumor tissue, the investigators showed that the absence of SMARCB1 interferes with SWI/SNF’s function.  Researchers observed the lack of SMARCB1 dramatically reduced the levels of several other proteins that make up the SWI/SNF complex, severely weakening its regulatory ability.

Specifically, SMARCB1 deletion interfered with the SWI/SNF’s ability to bind to genetic switches called enhancers—snippets of DNA that act as genome regulators to determine which genes get turned on and which ones remain dormant.

Some 10,000 to 20,000 enhancers are turned on in any given cell at any given time. Because all cells in an organism share the same DNA, the activity of these genetic switches is critical to determining which genes in a cell get activated to produce what proteins. In other words, enhancers play a vital role in determining the identity and behavior of a given cell.

Loss of SMARCB1, the experiments showed, led to the deactivation of many of the regular enhancers that modulate gene expression and cell behavior, while at the same time keeping another set of enhancers switched on. The researchers think it is precisely those “on” enhancers that may be critical to tumor growth and survival.

“If something goes wrong in deciding which enhancers should be on, the cell loses its identity,” said co-investigator Burak Han Alver, a research associate in biomedical informatics at HMS who focuses on epigenetic regulation and transcription. “When that happens, in most cases, the cells will realize there is a problem and trigger self-death. But, in rare cases, errors in the enhancer landscape can lead to cancer. This is what we observed is happening in the case of rhabdoid tumor formation.”

Finding a way to shut off the remaining active enhancers, the researchers said, could turn out to be a chink in the armor of rhabdoid tumors and provide a target for treatment.

In a final, proof-of-concept step, the scientists restored SMARCB1 inside cell lines derived from patient tumors. The tumor cell lines stopped growing, a finding that underscores the protein’s role in curbing tumor formation, the team said.