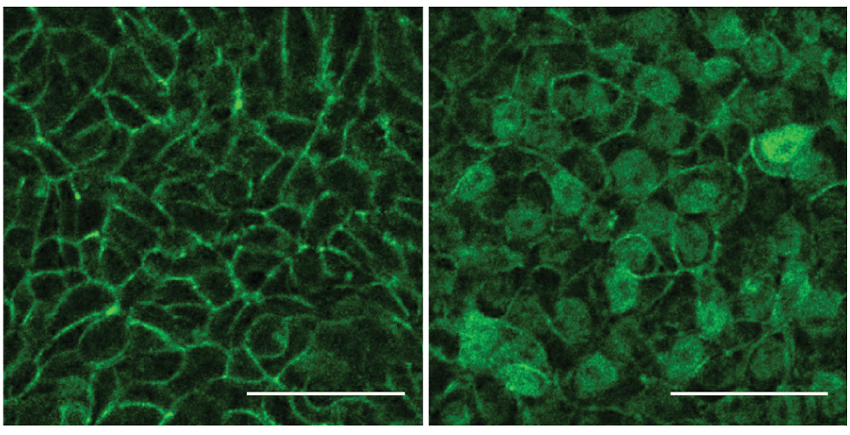 In the tail bud, cell signaling increased due to a higher pH level. Image: Pourquié lab

The researchers previously made the surprising discovery that changes in metabolism influence how cells communicate with each other, which in turn affects what cell type they become. Now, the team has pinpointed how metabolism and cell signaling are connected: by a change in the acidity, or pH levels, of the cellular environment.

The findings, published June 24 in Nature, have implications for regenerative medicine and cancer.

Olivier Pourquié, professor of genetics in the Blavatnik Institute at HMS and a principal faculty member at HSCI, studies the part of the embryo called the tail bud, where cells can convert into different types of tissue.

The cells of the tail bud have two different developmental pathways, said Pourquié: Their descendants can become neural cells, which go on to form the spinal cord, or they can become the mesoderm, which makes muscle and vertebrae.

How cells decide to go one way or another is not well understood, he said.

The importance of pH

In their previous study, the researchers found that the developmental decision was controlled by a metabolic process called glycolysis.

In the cells, glycolysis activated a type of cell signaling called Wnt signaling, which then resulted in cells choosing the mesoderm pathway. Conversely, when the researchers blocked glycolysis, Wnt signaling did not happen, and the cells chose to become neural cells.

The researchers found that glycolysis was responsible for creating the cells’ unique pH gradient. Furthermore, a higher pH inside the cells was necessary for Wnt signaling to occur.

“We saw a nice correlation between the peak of glycolytic activity, the peak of pH and the peak of Wnt signaling—both in the embryo and the iPS cell,” said Pourquié, who is also the Frank Burr Mallory Professor of Pathology at Brigham and Women's Hospital. “The chemical environment created by pH contributes to the choice of a mesodermal fate at the expense of the neural fate.”

The researchers identified an additional step that was influenced by the cells’ pH. After Wnt signaling peaked, it decreased due to a change in a protein called beta-catenin.

With a better understanding of how different cell types are made, researchers can improve the process of making cells for regenerative medicine.

Moreover, researchers can apply these insights to cancer and potential therapeutic strategies because, similar to tail bud cells, cancer cells have high glycolytic activity and a high cellular pH.

“This might not be an advanced behavior of the cancer cell. It could actually be reenacting a developmental metabolic program that is useful in the embryo,” Pourquié said. “The better we understand this condition, the easier it will become to act on it.”

This research was supported in part by the National Institutes of Health (grant 5R01HD085121).