Accelerating the End of Tuberculosis 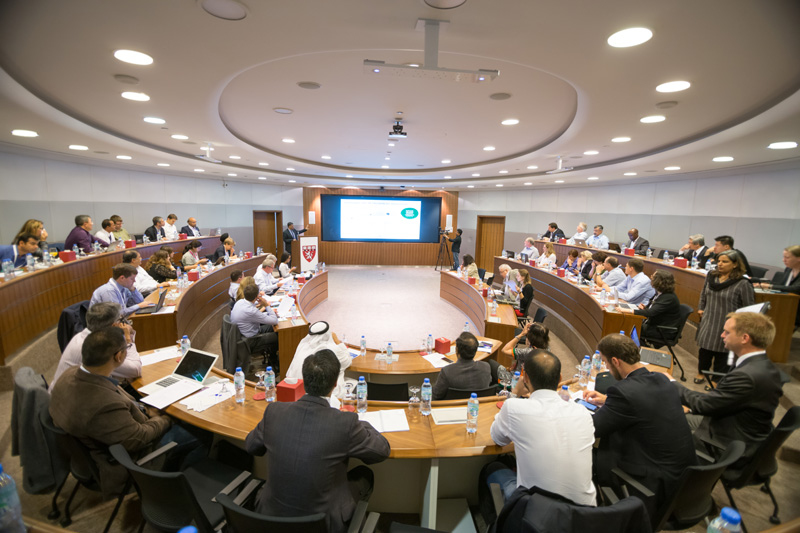 Leading scientists and clinicians in the fight against global TB met at the HMS Center for Global Health Delivery—Dubai to launch an ambitious eradication effort.

Leading scientists and clinicians in the fight against global TB met at the HMS Center for Global Health Delivery—Dubai to launch an ambitious eradication effort.

Although a cure already exists for tuberculosis, the disease is on the cusp of becoming the world’s most deadly infectious disease. The challenge for the forces combating TB is to figure out how to implement a tried and tested comprehensive strategy to stop a scourge that kills more than 1.5 million people every year.

In two events that both began on Oct. 26, leading TB researchers and health advocates from Harvard Medical School, Brazil, China, Dubai, India, Pakistan, Peru, South Africa, Russia and other countries met at the HMS Center for Global Health Delivery–Dubai to examine the state of the art in health care delivery science and to launch an action plan that they say can eliminate TB.

“No one should die of TB in the 21st Century. Period,” said Salmaan Keshavjee, director of the Center and HMS associate professor of global health and social medicine.

Fighting the disease requires a comprehensive approach that includes actively identifying people with TB disease and infection, treating all forms of it with targeted, effective therapies and addressing the many social factors that contribute to the spread of the disease and to TB mortality. Current policies generally advocate treating only the sickest patients, which allows the disease to continue to spread unchecked.

“There's been a breakdown somewhere,” said Pamela Das, senior executive editor at The Lancet. “Here we sit today and we see what does work if we do it properly. We can't wait for global institutions…we've got to go out there and do it.”

To address this gap between current best practices and the reality on the ground, the Center hosted two meetings: the first marking the launch of a new Lancet Series that provides the scientific basis for a comprehensive strategy to both end TB deaths and eradicate the disease; the second kicked off the Zero TB Cities initiative, which provides support for communities around the globe that are implementing comprehensive treatment and prevention projects aimed at ending the epidemic.

The Lancet Series is available online and as a standalone booklet. Faculty at the HMS Department of Global Health and Social Medicine also produced an activist’s guide to fighting tuberculosis, which gives health advocates a summary of the scientific, clinical and social case that can be used to strengthen TB policies among local and national health authorities.

At the Dubai meeting, researchers discussed the details of their findings, including new tactics for using data and mobile technology to fight TB; best practices for stopping transmission through prevention and for treating TB infection before it becomes an active disease; and the importance of incorporating tools to ameliorate the social causes of TB as part of an effective treatment and eradication program. There was consensus that the struggle against TB has to include addressing malnutrition and over-crowded living conditions.

“We have been laying the foundation for eliminating TB by creating a scientific roadmap and an activist roadmap, as well as supporting practical examples demonstrating that a comprehensive strategy works,” Keshavjee said. Toward that end, the second event of the day, Toward Zero TB Cities: Building Community-Based Health Care Delivery Models for the 21st Century, launched the Zero TB Cities Project, highlighted success stories about the fight against TB and initiated a new phase in the city-by-city fight to end the disease.

Formed in 2014, the Zero TB Cities Project aims to bring the global tuberculosis epidemic to an end by fighting the disease at the community level in high-burden countries. The project builds and enhances partnerships among activists, researchers, NGOs and health care providers to provide a comprehensive spectrum of care for people at all stages of the disease.

At the current glacially slow rates of decline in TB prevalence worldwide—around 1.6 percent per year—it would take centuries to reach the relatively low levels seen in countries in Western Europe. Joe Burzynski, director of the Bureau of Tuberculosis Control at the New York City Department of Health and Mental Hygiene, presented the secrets of its TB control campaign that dramatically reduced TB  after a deadly outbreak of a drug-resistant form in the 1990s. In New York, experts used active case finding, treatment of all forms of the disease, community outreach and social support for patients with TB to combat the disease. As a result, the prevalence of TB in the city fell from 52 per 100,000 at the height of the outbreak in the early 1990s to 7.2 per 100,000 in 2014, Burzynski said.

This is a success story that Carabayllo municipality in Lima, Peru, and Chennai, India—the first two cities to join the Zero Cities movement—hope to duplicate and ultimately improve upon. Rafael Alvarez, mayor of Carabayllo district in greater Lima, Peru, and Martin Clendenes, public health specialist at the Ministry of Health of Peru, both elaborated on their collaboration with Partners In Health and HMS. In addition to improved case finding, treatment and infection control, both cities have outlined plans to use this comprehensive platform to combat the economic and social factors related to TB, fight malnutrition, prevent drug and alcohol abuse, and treat mental health problems that can make it challenging for patients to maintain the often complex treatment regimens that are required to cure TB.

These inspirational case studies have demonstrated exceptional results thus far, which researchers and clinicians who attended the event said holds great promise for the future.

“By supporting key partners around the globe in their drive to create islands of elimination, we’re confident we can save lives, share valuable lessons with others in the movement to end TB and generate a sense of optimism often missing when people talk about the disease,” said Tom Nicholson, executive director of Zero TB Cities and an associate in research at the Duke Center for International Development at Duke University.

This effort was funded by support to HMS from Janssen Global. Funding for the Center was provided by the Dubai Harvard Foundation for Medical Research.