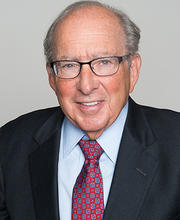 Dr. R. Bruce Donoff has served as Dean of Harvard School of Dental Medicine (HSDM) since 1991. He was born in New York City, and attended Brooklyn College as an undergraduate. He received his DMD from the Harvard School of Dental Medicine in 1967 and his MD from Harvard Medical School in 1973. Dr. Donoff's professional career has centered on Harvard's Faculty of Medicine and the Massachusetts General Hospital's Department of Oral and Maxillofacial Surgery. He began as an intern in 1967, served as Chairman and Chief of Service from 1982 through 1993, and continues to see patients today.

In addition to leading HSDM as its Dean, Dr. Donoff has made major contributions in research to the specialty of oral and maxillofacial surgery with interests in wound healing, bone graft survival, sensory nerve repair and oral cancer. He has published over one hundred papers, authored textbooks, and lectured worldwide. He recently helped launch the HSDM Initiative - Integrating Oral Health and Medicine, a project of great importance to him.

Dr. Donoff has received numerous honors during his academic career, including the American Association of Oral and Maxillofacial Surgeons Research Recognition Award, the William J. Gies Foundation Award for Oral and Maxillofacial Surgery, Fellow of the American Association for the Advancement of Science, the Alpha Omega Achievement Award and the Distinguished Alumni and Faculty Awards from the Harvard School of Dental Medicine. In 2014 he was a Shils-Meskin awardee for leadership in the dental profession.