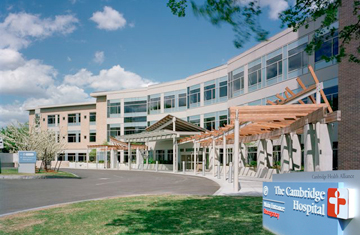 Cambridge Health Alliance (CHA) is a nationally respected and innovative healthcare system that is making a positive difference in people's lives. Based in Cambridge, Somerville, and Boston's metro-north communities, CHA provides coordinated care to a diverse patient population guided by its core values of compassion, integrity, respect, community, learning, and excellence.

CHA was created in 1996 when Cambridge and Somerville Hospitals merged as a state-approved independent public authority. Over the next decade, the system founded the Network Health plan, saved Whidden Hospital in Everett and critical community psychiatry services, and developed new health centers in Everett, Malden, and Revere. Once a single site, municipal hospital, CHA is now an integrated delivery system with 3 hospital campuses and 15 primary care practices operating under a single hospital license.

As a healthcare provider, CHA continues to emphasize the core services that people need to stay well and thrive - primary and specialty care, behavioral health, emergency care, maternity, and community wellness. It was an early adopter of both electronic medical records and planned care programs for chronic disease, and has used these tools to care for patients and engage hard-to-reach populations.

Today, CHA is adapting to state and federal healthcare reform by transforming itself into a new model for publicly funded providers. This includes the development of Patient-Centered Medical Homes to support patient health and partnering with funders using new payment models. These changes are being driven, in part, by a medical staff that remains committed to teaching, learning, and living the CHA mission.

CHA is at an exciting stage in its history. It is embracing clinical innovations while adapting to a changing industry landscape. As an academic leader, and the only system in the nation that is a teaching affiliate of Harvard Medical School, Harvard School of Public Health, Harvard School of Dental Medicine, and the Tufts University School of Medicine, it continues to train the next generation of health professionals within the realm of community health and primary care and in context of the communities it serves.