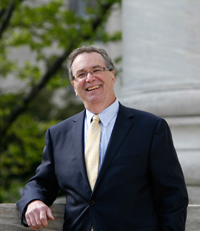 Jeffrey S. Flier became the 21st Dean of the Faculty of Medicine at Harvard University on September 1, 2007. His term as Dean ended in 2016 after nine years.

Flier, an endocrinologist and an authority on the molecular causes of obesity and diabetes, is the Caroline Shields Walker Professor of Medicine at Harvard Medical School. Previously he had served as Harvard Medical School Faculty Dean for Academic Programs and Chief Academic Officer for Beth Israel Deaconess Medical Center, a Harvard teaching affiliate.

Flier was born in New York City. He received a BS from City College of New York in 1968, and an MD from Mount Sinai School of Medicine in 1972, graduating with the Elster Award for Highest Academic Standing. Following residency training in internal medicine at Mount Sinai Hospital from 1972 to 1974, he moved to the National Institutes of Health as a clinical associate. In 1978, he joined the faculty of medicine at Harvard Medical School, serving as chief of the diabetes unit at Beth Israel Hospital until 1990, when he was named chief of the hospital's endocrine division.

In 2002, Flier was named Chief Academic Officer of Beth Israel Deaconess, a newly created senior position responsible for research and academic programs. He worked with hospital academic department chairs to ensure the quality and breadth of academic programs at Beth Israel Deaconess, through which most HMS students pass. He also served as the formal liaison to HMS, sitting on the Council of Academic Deans.

The father of two daughters, Flier lives in Newton, Mass., with his wife, Eleftheria Maratos-Flier, MD, who is a professor of medicine at Harvard Medical School and with whom he has collaborated on research in the area of neuroendocrine control of body weight.