How hummingbirds evolved a novel mechanism of sweet taste detection

Everything about hummingbirds is rapid. An iridescent blur to the human eye, their movements can be captured with clarity only by high-speed video. 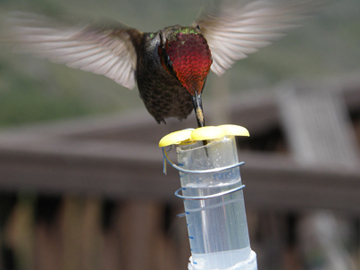 Slowed down on replay, their wings thrum like helicopter blades as they hover near food. Their hearts beat 20 times a second and their tongues dart 17 times a second to slurp from a feeding station.

It takes only three licks of their forked, tube-like tongues to reject water when they expect nectar. They pull their beaks back, shake their heads and spit out the tasteless liquid. They also are not fooled by the sugar substitute that sweetens most diet cola.

The birds’ preference for sweetness is plain, but only now can scientists explain the complex biology behind their taste for sugar. Their discovery required an international team of scientists, fieldwork in the California mountains and at Harvard University’s Concord Field Station, plus collaborations from Harvard labs on both sides of the Charles River.

Now, in a paper published in Science, the scientists show how hummingbirds’ ability to detect sweetness evolved from an ancestral savory taste receptor that is mostly tuned to flavors in amino acids. Feasting on nectar and the occasional insect, the tiny birds expanded throughout North and South America, numbering more than 300 species over the 40 to 72 million years since they branched off from their closest relative, the swift.

“It’s a really nice example of how a species evolved at a molecular level to adopt a very complex phenotype,” said Stephen Liberles, HMS associate professor of cell biology. “A change in a single receptor can actually drive a change in behavior and, we propose, can contribute to species diversification.” 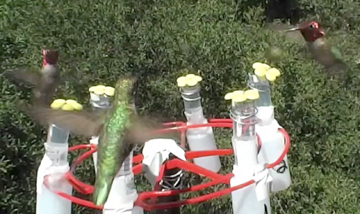 This sweet discovery all started with the chicken genome. Before scientists sequenced its genes, people assumed that chickens and all birds taste things the same way that mammals do: with sensory receptors for salty, sour, bitter, sweet and the more recently recognized umami taste, which comes from the Japanese word for savory.

The canonical view stated there was a sweet receptor present in animals, much smaller than the large families of receptors involved in smell and bitter taste perception—vital for sensing safe food or dangerous predators.

Some animals have lost certain taste abilities. The panda, for example, feeds exclusively on bamboo and lacks savory taste receptors. Carnivores, notably cats, are indifferent to sweet tastes. The gene for tasting sweetness is present in their genomes, but it’s nonfunctional. Scientists suspect that an interplay between taste receptors and diet may effectively relegate the sweet taste receptor into a pseudogene that does not get turned on and eventually disappears.

The chicken genome is another story: It has no trace of a sweet-taste receptor gene. Faced with this all-or-nothing scenario, Maude Baldwin, co-first author of the paper, had one reaction.

“The immediate question to ornithologists or to anybody who has a birdfeeder in the backyard was: What about hummingbirds?” she recalled. “If they are missing the single sweet receptor, how are they detecting sugar?”

More bird genomes were sequenced, and still no sweet receptor.

So began Baldwin’s quest to understand how hummingbirds detected sugar and became highly specialized nectar feeders. A doctoral student in organismic and evolutionary biology and the Museum of Comparative Zoology, she is a member of the lab of Scott Edwards, Professor of Organismic and Evolutionary Biology and Curator of Ornithology in the Museum of Comparative Zoology. She sought out Liberles at a meeting of the International Symposium on Smell and Taste in San Francisco. They agreed to work together on experiments that would eventually reveal how hummingbirds evolved and diversified, based on a change in their taste receptor.

After cloning the genes for taste receptors from chickens, swifts and hummingbirds—a three-year process—Baldwin needed to test what the proteins expressed by these genes were responding to. She joined forces with another scientist at another International Taste and Smell meeting. Yasuka Toda, a graduate student of the University of Tokyo and co-first author of the paper, had devised a method for testing taste receptors in cell culture.

“This is the first time that this umami receptor has ever been shown to respond to carbohydrates,” Baldwin said.

Toda mixed and matched different subunits of the chicken and hummingbird taste receptors into hybrid chimeras to understand which parts of the gene were involved in this change in function. All told, she found 19 mutations, but there are likely more contributing to this sweet switch, Baldwin and Liberles suspect.

“If you look at the structure of the receptor, it involved really dramatic changes over its entire surface to accomplish this complex feat,” Liberles said. “Amino acids and sugars look very different structurally so in order to recognize them and sense them in the environment, you need a completely different lock and key. The key looks very different, so you have to change the lock almost entirely.”

Once the mutations were discovered, the next question was, do they matter? Does this different taste receptor subunit drive behavior in the hummingbirds?

Back at the feeding stations, the birds answered yes. They spat out the water, but they siphoned up both the sweet nectar and one artificial sweetener that evoked a response in the cell-culture assay, unlike aspartame and its ilk. It’s not nectar, with its nutritional value, but it’s still sweet.

“That gave us the link between the receptor and behavior,” Liberles said. “This dramatic change in the evolution of a new behavior is a really powerful example of how you can explain evolution on a molecular level.”

This work underscores how much remains to be learned about taste and our other senses, Liberles said.

“Sensory systems give us a window into the brain to define what we understand about the world around us,” he said. “The taste system is arguably a really direct line to pleasure and aversion, reward and punishment, sweet and bitter. Understanding how neural circuits can encode these differentially gives us a window into other aspects of perception.”