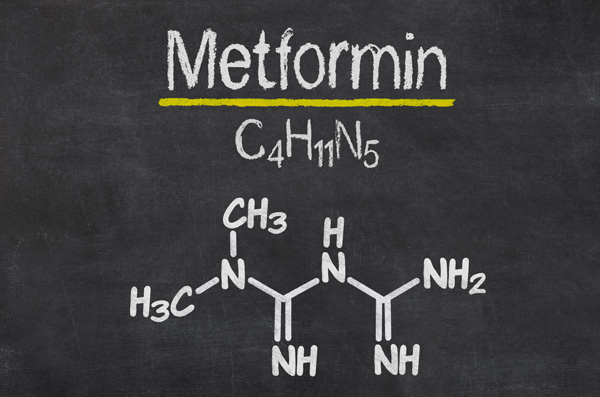 Considerable evidence has indicated that a drug used for more than 50 years to treat Type 2 diabetes can also prevent or slow the growth of certain cancers. But the mechanism behind metformin’s anticancer effects has been unknown.

Now, a team of Harvard Medical School investigators at Massachusetts General Hospital has identified a pathway that appears to underlie metformin’s ability both to block the growth of human cancer cells and to extend the lifespan of the C. elegans roundworm. Their findings imply that this single genetic pathway plays an important role in a wide range of organisms.

“We found that metformin reduces the traffic of molecules into and out of the nucleus—the ‘information center’ of the cell,” said Alexander Soukas, HMS assistant professor of medicine at Mass General and senior author of the study published in Cell.

“Reduced nuclear traffic translates into the ability of the drug to block cancer growth and, remarkably, is also responsible for metformin’s ability to extend lifespan,” Soukas said. “By shedding new light on metformin’s health-promoting effects, these results offer new potential ways that we can think about treating cancer and increasing healthy aging.”

Metformin appears to lower blood glucose in patients with Type 2 diabetes by reducing the liver’s ability to produce glucose for release into the bloodstream. Evidence has supported the belief that metformin blocks the activity of mitochondria, the powerhouses of the cell. But, Soukas said, more recent information suggests the mechanism is more complex.

Several studies have shown that individuals taking metformin have a reduced risk of developing certain cancers and of dying from cancers that do develop. Current clinical trials are testing the impact of metformin on cancers of the breast, prostate and pancreas. Several research groups are working to identify its molecular targets.

Soukas’ team had observed that, just as it blocks the growth of cancer cells, metformin slows growth in C. elegans, suggesting that the roundworm could serve as a model for investigating the drug’s effects on cancer.

Their experiments found that metformin’s action against cancer relies on two elements of a single genetic pathway: the nuclear pore complex, which allows the passage of molecules into and out of the nucleus, and an enzyme called ACAD10. Basically, metformin’s suppression of mitochondrial activity reduces cellular energy, restricting the traffic of molecules through the nuclear pore. This shuts off an important cellular growth molecule called mTORC1, resulting in activation of ACAD10, which both slows the growth and extends the lifespan of C. elegans.

In human melanoma and pancreatic cancer cells, the investigators confirmed that drugs in the metformin family induced ACAD10 expression, an effect that depended on the function of the nuclear pore complex. Without the complete signaling pathway—from mitochondrial suppression through nuclear pore restriction to ACAD10 expression—cancer cells were no longer sensitive to the effects of metformin-like drugs.

“Amazingly, this pathway operates identically, whether in the worm or in human cancer cells,” said Soukas. “Our experiments showed two very important things: If we force the nuclear pore to remain open or if we permanently shut down ACAD10, metformin can no longer block the growth of cancer cells. That suggests that the nuclear pore and ACAD10 may be manipulated in specific circumstances to prevent or even treat certain cancers.”

The essential contribution of ACAD10 to metformin’s anticancer action is intriguing, Soukas added, because the only published study on ACAD10 function tied a variant in the gene to the increased risk of Type 2 diabetes in Pima Indians, suggesting that ACAD10 also has a role in the drug’s antidiabetes action.

“What ACAD10 does is a great mystery that we are greatly interested in solving,” he said. “Determining exactly how ACAD10 slows cell growth will provide additional insights into novel therapeutic targets for cancer and possibly ways to manipulate the pathway to promote healthy aging.”