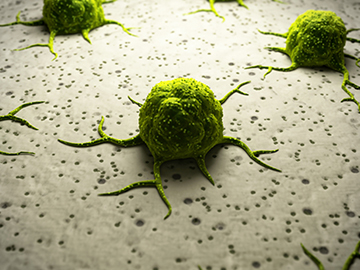 Ninety percent of lung cancer deaths are caused by the tumor’s spread—or metastasis—to other organs. Researchers have now discovered an approach to blocking metastasis in the most common type of lung cancer, adenocarcinoma, that could be added to chemotherapy treatments aimed at shrinking the primary tumor.

Kerstin Sinkevicius, a research fellow at Boston Children’s Hospital, started with this question: Is there anything in a lung tumor’s environment that makes it metastasize? She sampled tissue from human lymph nodes—the first place cancers typically spread to—to see if the cells there were secreting anything that might lure cancer cells to migrate.

One chemical stood out: a growth factor called brain-derived neurotrophic factor, or BDNF. Secreted near maturing neurons, BDNF is best known for its role in stimulating the developing nervous system.

A brain factor? Yes. When Sinkevicius took BDNF out of the equation, migration of adenocarcinoma cells in culture dropped nearly twofold, suggesting that the cancer cells take advantage of the same signals neurons use.

“A lot of times cancer cells use mechanisms that are built in,” explained Sinkevicius.

She and senior investigator Carla Kim, Harvard Medical School associate professor of genetics at Boston Children’s, then systematically looked for anything in the primary lung tumor that might be drawn by BDNF’s signal. Could blocking that communication prevent cancer cells from migrating?

That question led them to a cellular receptor molecule called TrkB. When the researchers took that out of the equation, cell migration was again significantly decreased. And when they deleted TrkB in a live mouse model of adenocarcinoma, only 17 percent of the mice got metastases, as compared with the usual rate of 50 percent.

“The primary tumors were the same, so we think TrkB is specifically important for metastasis,” said Sinkevicius. Their findings were published in July in the Proceedings of the National Academy of Sciences.

When adenocarcinoma cells were cultured in low-oxygen conditions—conditions under which lung cancers are more apt to metastasize—TrkB was especially abundant. “Oxygen-deprived tumor cells are stressed out and may be looking to go somewhere else,” said Sinkevicius. And TrkB is their ticket.

A two-pronged strategy for lung cancer?

Traditionally, metastasis has been an understudied area in cancer. Companies generally prefer to seek out agents that shrink the primary tumor—a metric that’s fairly short term and easily measurable. Antimetastatic agents are a less attractive investment, since metastasis is variable and can take years to occur.

However, compared with previously identified targets for preventing metastasis, TrkB may be easier to hit, said Kim, since chemical TrkB inhibitors are already available and being tested for depression and neurologic disorders such as epilepsy.

“There may be patients for whom TrkB inhibition is particularly useful,” she said. “Certain subsets of adenocarcinoma have higher levels of TrkB.”

In their study, she and Sinkevicius found that targeting TrkB was especially effective in the roughly 60 percent of adenocarcinomas that lack two commonly seen mutations, in the genes Kras and EGFR.

And other metastasis-inhibiting compounds could emerge from this work. Kim hopes to do gene-expression studies to see if there are changes in gene activity when TrkB is inhibited. These could help find additional drug targets.

“This is just one hit from the screen Kerstin did,” she said. “It demonstrates that you can use a simple cell line-based screen to identify important molecules in metastatic lung cancer.”