Tiara Lacey had her life planned out earlier than most. “A scholarship essay I filled out as a junior in high school asked about my long-term goals,” she says. “I put down that I was going to go to Spelman College and then get a PhD from Harvard.”

It never occurred to Lacey to question whether she could do it. “I really broke my neck in high school and knew I would do the same thing in college,” she says. She worked full-time as a researcher, was involved in student government, took on service projects with her sorority, and did four summer programs. 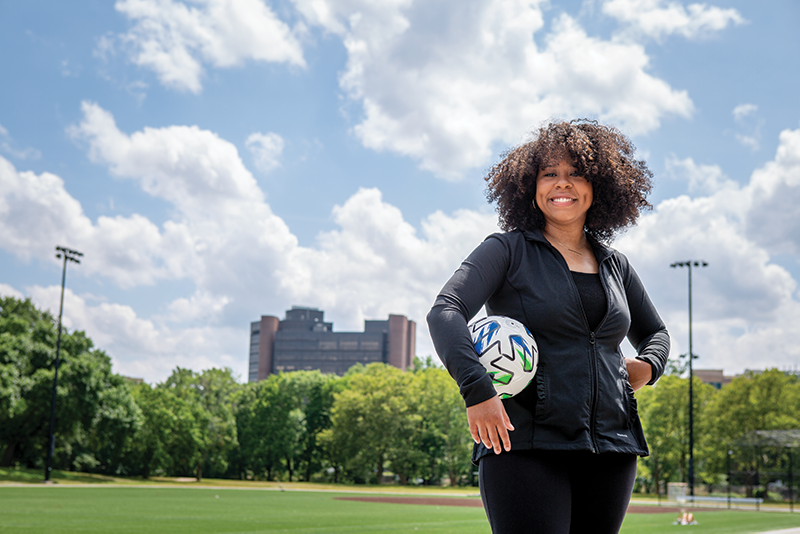 She had a head start on achievement. Her father, a real estate agent in a suburb of Columbia, Maryland, “gives 110 percent to everything,” she says, and always encouraged her and her sister, a law school graduate, to do the same. Their mother, an engineer, was similarly driven, but was diagnosed with breast cancer when Lacey was 10 and died three years later. “I dealt with the loss by getting overinvolved at school,” Lacey says. “That was the coping mechanism of choice.”

Coming from a historically Black women’s college to a predominantly white co-ed institution was a “major leap,” both in terms of having to combat her tendency toward timidity in classes with men and needing to become comfortable in a cohort of fifty that had only seven students from underrepresented populations. “The increased visibility, and going through a bit of an impostor experience, were an adjustment for me,” she says.

Those challenges overcome, she now mentors young scholars in the Summer Honors Undergraduate Research Program (SHURP) at HMS and has taken on a leadership role in campus empowerment and social justice initiatives. “Just being the only minority face in the room isn’t enough,” she says. “I want to make sure I’m not the only one. To lift as I climb.”

Surprisingly, her future is less certain than it seemed to her teenage self. “The downside of working so hard is that you miss cookouts, graduation parties, birthdays,” she says.

As a PhD candidate in the Harvard Biological and Biomedical Sciences Program, Lacey is part of the laboratory of HMS neuroscientist Corey Harwell, where the research team studies how neurodevelopmental history shapes adult function. Lacey’s work focuses on the developmental regulation of a particular type of neuronal signaling, research that may provide further insight into how the brain adapts to new information and influences behavior.

Although Lacey hasn’t ruled out staying in academia, she’s also interested in policy, industry, and consulting on biotech issues. “All options are open,” she says.

Isle Bastille’s childhood was unlike those of most of her Harvard peers in several ways, but one in particular stands out: “My parents were never really the type to focus on school,” she says. “My dad’s catchphrase was, ‘You don’t have to go if you don’t feel like going.’ ”

Bastille was born in Guadalajara, Mexico, where her parents met while teaching at the American School Foundation, a nonprofit education organization based in Mexico. Eventually settling in Barnstable, Massachusetts, where her father had grown up, her parents divorced when Bastille was 6, but remained united on parenting philosophies. “They were very anti-television, and one of their biggest things was that you weren’t allowed inside if it was nice out. So the majority of the time I was outside or reading.” 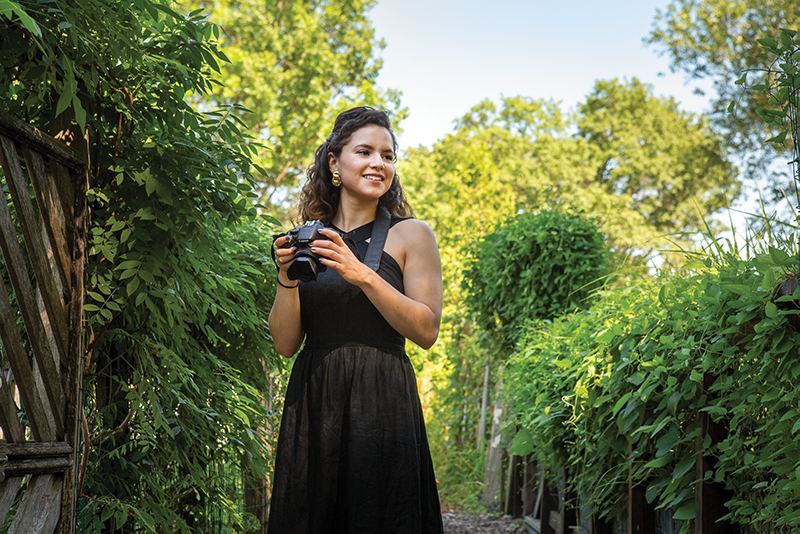 As a child, Bastille often conducted her own mini science experiments, although she didn’t define them that way at the time. She installed several ant colonies in her bedroom—“much to my mother’s dismay”—so that she could observe the insects’ behaviors, and she frequently deployed acorns in the family’s backyard in her quest to observe squirrel behavior. (Results, she admits, were often inconclusive.)

Her dreams of college were tempered by financial concerns, but she received a generous financial aid package from Cornell University and planned a career as a veterinarian until she “got swept away by how interesting neuroscience was.” While she considers herself a cellular biologist at heart, “the nervous system has some of the coolest, most exquisitely optimized cells in the body.” And today, as a graduate student in the Program in Neuroscience working in the lab of HMS neuroscientist Lisa Goodrich, Bastille investigates how neurons in the ear capture auditory stimuli and accurately transmit that information to the brain.

Bastille says her experiences at HMS have opened up new worlds to her. In her first year, she got to work with “fancy” electron microscopes, which made a deep impression.

“I was looking at thinly sliced sections of spinal cord tissue and could see the subcellular organelles within all the cells,” she says. “That was just a total blast to me.”

Bastille tries to be “intentional” in maintaining her cultural identity. In her work in mentorship programs such as the School’s Summer Honors Undergraduate Research Program and the Health Professions Recruitment and Exposure Program, Bastille has “heard from these brilliant young women that they’ve never seen someone like me being a scientist.” She adds, “I just recently realized I’ve personally never met a Latina principal investigator.”

Might she someday be a Latina PI? “I never take for granted anything I have,” she says. “I’m just like, ‘Wow, let’s see where this goes!’ ”

As the oldest of five children, Ayana Henderson sees herself as a role model. “I want my younger siblings to know the possibilities are limitless and whatever their passion is, they should go for it without fear of failure,” she says. Henderson knows how such support can shape young lives. Her mother and especially her grandmother, who helped raise her, were “very nurturing spirits.”

Being deeply nurturing and empathic can prove to be too much of a good thing, however. “I wanted to be a physician,” says the doctoral candidate. “I started shadowing my pediatrician to learn about it but quickly realized I couldn’t handle the emotional burden of direct patient interaction.” 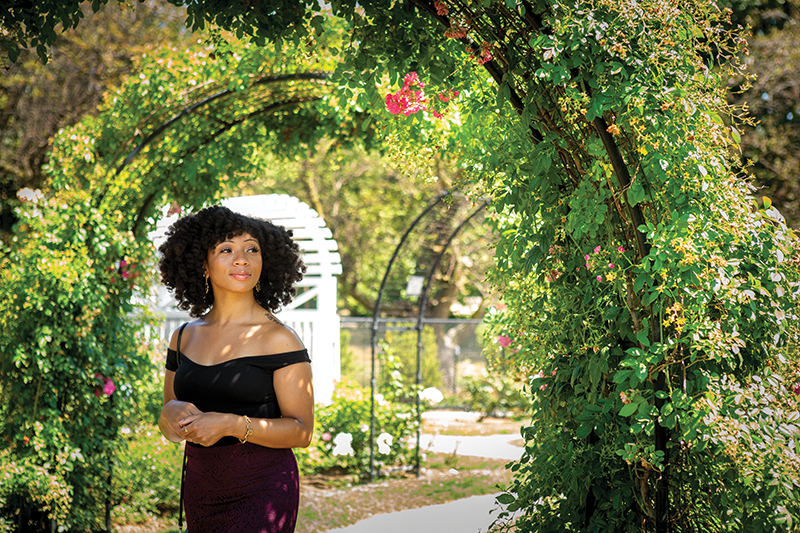 It took a while for her to come to terms with not being able to compartmentalize her compassion enough for clinical practice. Even when, as an undergraduate, she became aware of research as a career path, she remained committed to combining her PhD with an MD. “My family’s advice had always been ‘you should be a doctor,’ ” she says. “Many Black families have a limited view of what a scientist looks like because very few people in science look like us.”

A gap year spent in the Research Scholar Initiative post-baccalaureate program in Harvard’s Graduate School of Arts and Sciences showed her that she could help people—and be happier—by studying the molecular mechanisms that underlie disease, particularly diseases that disproportionately affect women and minorities. She is now a PhD candidate in Harvard’s Biological and Biomedical Sciences Program, working in the laboratory of HMS geneticist Monica Colaiácovo.

Harvard was “never a place where I could see myself,” Henderson admits, but once she was accepted, she found a community among the Minority Biomedical Scientists of Harvard, which made her realize “I will be supported here.” More recently, activism against racism has given her hope that this moment of cultural change will ultimately show young people like her siblings that there is a place for them in academia and especially in STEM fields.

“My immediate reaction to the deaths of George Floyd and Breonna Taylor, among so many others, was sadness and hopelessness,” she says. “But having a team of people beside you who are so passionate makes you want to continue to fight. Whatever my career is to be I know it will include science outreach and mentoring of underrepresented kids. I really love children and hope to inspire and expose them to science as early in their lives as possible.”