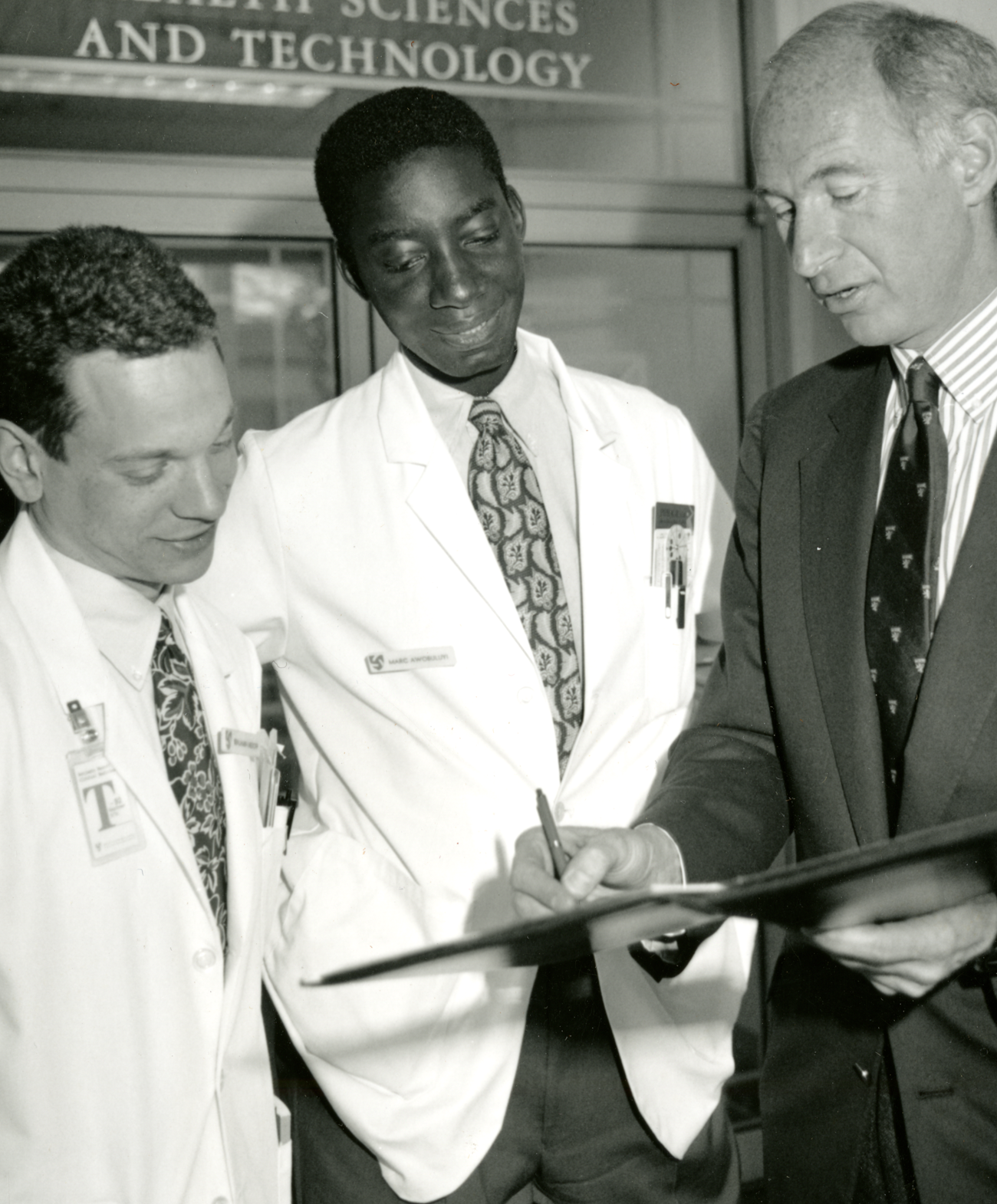 Racism in Medicine Observations from alumni

How did receiving help with the costs of medical school assist you while you were a student and afterward?

Research at HMS
Rounds, the Pandemic

Knowing I could choose my specialty based upon excitement and aptitude rather than income mattered greatly.

I had no help during medical school. (Thank you, Dad, for paying my way.) By the time I was a resident I had the GI bill, and that permitted me to support a family without moonlighting. One of my resident mates was secretly moonlighting and it was brutal for him.

I didn’t receive financial aid. I was married at the end of the first year. My wife worked and covered most of our expenses.

The student money from HMS was critical! That’s why I established a monetary award for an HMS student going into ophthalmology, the John D. Bullock Ophthalmology Award. I am still most grateful. After internship, the U.S. Navy, and residency, we were “rolling in it” because my wife worked when I was an intern and I moonlighted while in the Navy and made enough that I did not have to work outside as a resident in ophthalmology: I could devote all my time to learning and research.

I was sued by Harvard for student loans when I was working in their program as a fellow and only making $12,000 a year. It ruined my credit for years.

Are you kidding? I was completely dependent on financial aid throughout medical school. Fortunately, in those days, interest rates were very low, interest did not accrue, and no repayment was required until after you had completed residency and your military obligation. After that, I was able to pay off the loans over 17 years without facing the kind of oppressive debt burden students are dealing with today. Loans in those days were designed to benefit students, not banks.

I never got any financial aid for college or medical school. My father, Tom Glatter, is a retired cardiologist who worked his entire career serving indigent patients. My grandparents were immigrants with no money, although my grandfather worked as a psychiatrist at a state psychiatric hospital. My dad put himself through college and medical school by selling his blood (he is AB negative) and playing piano in bars.

I was able to borrow from Harvard at very low rates. Scholarships and grants were few or none at all.

“Receiving financial aid, including Loans for Disadvantaged Students, was a gift the scope and value of which gained clarity over time.”

I was fortunate to be part of the Health Sciences and Technology program. By participating in the research assistantship program, nearly half of my tuition was covered, making my education much more affordable. But given how expensive medical education has become today, every student needs financial support. It is not realistic to expect parents to pay full tuition for both college and graduate education for their children, as it will leave most unable to ever retire.

It lessened the burden on my parents, who used their retirement funds for my tuition.

The Massachusetts Medical Society had a nice loan program with generous terms. After graduating residency, I took a fellowship at The Rockefeller University. Coincidentally, the National Institutes of Health began a medical school loan assistance program that helped me pay back my loans
during my fellowship. I hope it still exists.

I am extremely fortunate to have received generous financial aid and to graduate with only a small amount of debt, which I paid off during my first year of residency. It granted me the freedom to pursue my clinical passion in pediatrics, typically a low-paying field compared to others, without concern about financial implications. It also granted me the freedom to decide to practice medicine back home in Hawaii, despite the high cost of living and relatively lower pay for medical professionals.

I could not have been a student at HMS without a scholarship and employment opportunities that were suggested to me by the registrar, the unforgettable Dorothy “Dottie” Murphy. She found part-time work for me during my first two years. I came out debt-free and was able to choose to do the right things afterward, instead of trying to repay loans.

I benefited from the NIH Loan Repayment Program for physician-scientists to pay off my medical school loans, beginning on an integrated research pathway in my pediatric residency. This loan repayment program was life-changing for me and allowed me to focus on a research career. We need more programs like this to grow and diversify the pool of next generation physician-scientists.

“I am extremely fortunate to have received generous financial aid and to graduate with only a small amount of debt. It granted me the freedom to pursue my clinical passion in pediatrics, typically a low-paying field.”

I was fortunate to receive a full scholarship, tuition, living expenses, and spending money for four years from the Charles Smith Bequest. It changed my life. At HMS, I never worried about whether I would have enough to eat and later I was always able to do what I loved. Without debt, the salary was never a driving force. Later in life, as the founding dean of a new medical school, I raised funds so that every student in the charter class had a full scholarship like mine. It was a chance to give back.

Receiving financial aid lifted a huge burden off my parents’ shoulders, as they had no resources to help me pursue my dream. Later, after residency, I was able to take a job back in my hometown, helping folks in my community rather than focusing on the financial implications of my decision. It allowed me to put the people I cared about first.

Receiving financial aid was invaluable. Without assistance, it is unlikely that I’d have been able to attend med school. I was married and had a child at the time and meeting expenses was possible only because of the assistance I received.

Receiving financial aid, including Loans for Disadvantaged Students, was a gift the scope and value of which gained clarity over time. Having those loans at zero percent interest during school and residency not only saved money, it let me focus on my training. Along with several classmates, I eventually found the White Coat Investor and developed financial literacy. HMS financial aid is quite unique! I’m just a few months from paying it off, and grateful. I’m looking forward to continuing to pay it forward!

Thankfully, I did receive help with the cost of medical school, but not from HMS. After receiving no offer of financial aid, I made an appointment with the office but was told I did not qualify for the aid programs they had available. Fortunately, the U.S. Air Force viewed me differently; my scholarship and subsequent service left me eternally grateful to the military, and yes, to Harvard for an exceptional education that extended far beyond the merely medical.

The financial assistance enabled me to incur a manageable debt which I was able to pay off in about five years.