Practice might get you to the Olympics, but mental preparation may be what puts you on the podium

Yogi Berra, the eminently quotable former New York Yankees player and manager, is credited with saying that “90 percent of the game is half mental.” Research may bear him out: How elite athletes handle the pressures of competition is determined by years of practice. Training the body without also preparing the mind, however, may undermine the fruits of physical effort when an athlete is faced with the rigors of competition. During a big race or a deciding game, many factors are beyond human control: weather, equipment integrity, and unexpectedly strong opponents. Although an athlete may not be able to stop the rain, she can control her own training and preparation.

Saiya Remmler ’92, a child psychiatrist with a Massachusetts-based private practice, knows a thing or two about how to prepare for challenges. A member of the U.S. National Rowing Team in 1992 and 1993, Remmler and her rowing partner won a bronze medal in the lightweight women’s double sculls event at the World Championships in 1992.

Remmler, who is still at the top of her game, agrees that focusing on what you can control is key: “I think sports and games or skill-based activities—art, dance, playing a musical instrument—all require a good deal of practice. And undertaking that essential practice is something you can control. You can do the work and push yourself harder, and it has an impact on the outcome. It doesn’t mean that you will always win, but it does mean that you are doing what you need to do to win.”

One thing that elite athletes are taking more control of is their mental preparation, a tactic that can include working with sport psychologists and specially trained coaches. Sport psychologists and an increasing number of coaches use techniques such as visualization, meditation, and a mind–body approach known as the personality parts approach, which combines self-talk, meditation and relaxation, and goal-setting. Mikaela Shiffrin, who won a gold medal in women’s slalom at this year’s Olympic Games, prefers visualization, saying in an interview that she’d turned over in her mind every circumstance, every impediment, every mistake so many times that what everyone else considered to be her first Olympics, was, for her, her thousandth.

Techniques and approaches to enhance performance in competition can help athletes overcome their mind’s reactions  to the risks, fears, and tensions related to competition and maintain their concentration amid distractions. Attaining an optimal performance state—when the physical and the mental come together seamlessly—is the goal of, and can be the reward for, paying close attention to the power of an aware mind. This state, also referred to as flow or being in the zone, can include perceptual changes such as time seeming to slow; heightened concentration; dissociation from distractions; greater tolerance of pain; and a feeling of transcendence. Some athletes say that after their best performances they remember almost nothing of their actions; they were able to so fully immerse themselves in the experience of competition that they succeeded in shutting out everything except the task at hand.

Some challenges present themselves before a competition, and sometimes they come from within. Athletes want to understand these inner reactions and learn what to do with them. In his work with athletes, John Livingstone ’58, an HMS assistant clinical professor of psychiatry at McLean Hospital, finds that intrusive thoughts, such as being concerned about letting down your team or being out of shape; emotions like dread and overexcitement; and bodily sensations, such as “butterflies” in the stomach, commonly take over athletes. These reactions, which are collectively known as “pop-ups,” can be triggered by events, relationships, perceived slights from coaches or teammates, or the sum of an athlete’s experiences. The agendas of the pop-ups may be in conflict, says Livingstone, and, if not handled well, can hijack the mind and body and compromise an athlete’s concentration and muscular performance.

Livingstone draws upon evidence-based methods to teach coaches to help athletes understand that they can soften these reactions by saying, “I am listening to you. I’m curious, and I’ll get back to you later.” He adds, “Athletes need to appreciate that these pop-ups are only a part of themselves. This appreciation frees them to focus on their sports.”

To athletes he works with, Livingstone recommends that, after clearing themselves of an interfering pop-up, they revisit the reaction soon and spend about 15 minutes exploring the feeling and belief behind it. There is evidence, he says, that this second step leads to a more permanent change in the competitor’s inner world. Past practice has been to ignore and bury intruding thoughts, but pushing down these mental intrusions has disadvantages: it stimulates production of performance-compromising stress hormones, such as cortisol; it allows a pop-up to reappear in the next competition; and it prevents athletes from learning from their reactions. Practicing this kind of engagement, he notes, helps an athlete tolerate difficult emotions and pain.

Livingstone, himself a dedicated rower and a mind–body athletic coach, has adapted for sports the internal family system psychotherapy concept of working with personality parts, an approach that differs considerably from positive self-talk and meditation. He notes that research has found that athletes who explore their inner reactions not only learn more about themselves, they also develop lifelong skills for handling intrusive mental experiences.

Another view of how to cope, especially with an off performance, is provided by Richard Ginsburg, an HMS assistant clinical professor of psychology at Massachusetts General Hospital and co-director of the MGH PACES Institute of Sport Psychology, who points to the potential benefits of failure. There is research, he says, indicating that we learn more from our failures and that the brain “grows more from failure than it does from success.” 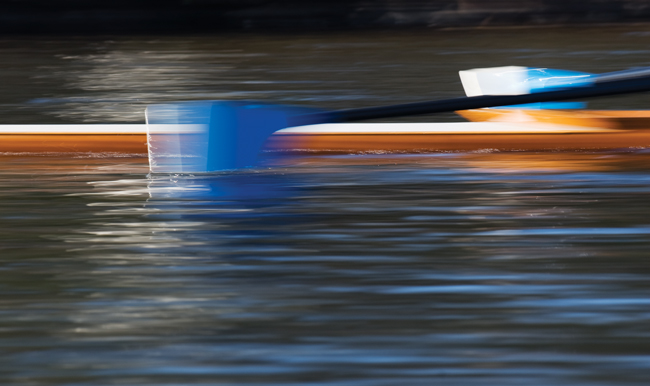 Gaining the ability to cope with the ups and downs of performance, athletic or artistic, can start early. The psychological development of an athlete may, in fact, have an analogy in child development, particularly when compared with the concept of play, or recreation. Citing the work of Donald Winnicott, a renowned child psychiatrist who did most of his work in the 1940s and 1950s in England, Remmler talks about “the idea of the transitional space, which takes place for people when they’re engaged in an artistic or creative process. And you may not think of rowing as creative or artistic, but racing most certainly is. Racing is a performance which requires you to use your developed skills while being attuned with your instincts.”

Winnicott’s concept of transitional space, says Remmler, can be loosely defined as the space where boundaries between reality and fantasy dissolve slightly, where an individual has an opportunity to move from what she was into what she can become. It is, she adds, “a place where one can express one’s ‘best’ self.”

In athletics, this opportunity to move toward one’s full potential depends on experiencing situations that lead to trust; for instance, practice sessions that lead to an athlete’s trust in her ability to perform and to an understanding of how she will react during competition. Winnicott notes that this evolution works best when a trusted friend, therapist—or coach, in this context—gives the individual—the athlete—positive feedback.

Ginsburg sees the search for self through sports develop in children from an early age, saying that “for children between the ages of 6 and 12, the focus is on building relationships and skills, and on developing a sense of belief in their own abilities, how to play a sport and be part of a team.” Later, adolescents start to “learn to work through adversity in a relatively benign setting like athletics.” According to Ginsburg, participating in sports will naturally lead to disappointments and conflicts. But those experiences can foster an ability to deal with conflict and to work with others toward a common goal. “It’s sort of the playground for all of life’s issues,” he adds.

Echoing Winnicott’s thoughts on the role a trusted person can have in an individual’s development, Ginsburg says that a coach can help young athletes focus on questions such as “How did we play? Did we play the style we like to play? Are we working well together as a team? Are we never giving up? If we do those things, it doesn’t matter what happens on the scoreboard.”

Remmler says that coaching comes down to having “coaches who have confidence in you, one who can convince you that they believe in you and that you can believe in yourself, too. It’s a lovely relationship when it works well.”

While team athletes draw on the energy of their teammates, individual athletes often field their own internal team, working on Berra’s “half mental” part of preparation by carrying in their minds the people who believe in them and the people they love and admire, each reminding them of their true selves as they flow.