The warmth from a friendship kindled decades ago glows again

Exploration was my medical school safety valve. I had come to HMS after earning a master of science degree and after serving in the Peace Corps and a stint in the U.S. Army. While my graduate work took place in Pennsylvania, my time in the Peace Corps took me to Addis Ababa, Ethiopia, where I taught general science to ninth graders and general chemistry to tenth-grade students at the Tafari Makonnen School. My time in the Army found me once again in the United States, stationed in Natick, Massachusetts, where I worked in a research lab by day and, at night, as an orderly off base at the Leonard Morse Hospital.

Those experiences fueled my interest in exploring extracurricular opportunities outside of HMS. Venturing into the diverse cultures that surrounded the School provided me with opportunities to decompress and balance the demands of academic life. As often as possible I attended concerts by the Boston Pops, Red Sox and Bruins games, and performances at the Elma Lewis School of Fine Arts, notably its annual production of Langston Hughes’ Black Nativity. I also developed an affinity for the Roxbury community and for Boston City Hospital, where I did most of my rotations. I was privileged to be a guest in the homes of several of the patients I treated.

Being a church kid, I continued worshipping while in Boston. Under “watch care,” I was given a temporary spiritual home at the Twelfth Baptist Church in Roxbury, and I also enjoyed frequenting the spirited services of a nearby Church of God in Christ. My favorite getaway destination was the quaint fishing village of Gloucester, Massachusetts, on Cape Ann.

My GI benefits together with my salary from my night shift job—typing the metal ID plates for patients newly admitted to the wards at the former Peter Bent Brigham Hospital—provided some discretionary funds. From this income, I eked out about $2,000 for the purchase of a new 1972 beige Ford Pinto.

Another of my off-campus experiences involved volunteering for Boston’s Big Brother program. I was matched with Bernard, an 8-year-old boy who lived in Roxbury. Bernard’s mother had asked to have her youngest son become part of the program; as a single mother of five, she had concerns for him.

Bernard and I would get together on my available weekends, usually once or twice a month. We saw the Sox, the Bruins, and the Celtics play, and we visited arcades, hit the zoo, took road trips, and celebrated milestones, including birthdays, which I am especially fond of celebrating. We had great, fun times together that, in the process, allowed me to relive my boyhood.

After two years in the program I attempted to prepare Bernard for my departure through affirmation and encouragement. Because Bernard’s father was in his life, I had never tried to take his dad’s place. But Bernard and I were close, so I wanted him to know about my upcoming graduation and the coming change and to understand it.

I was matched to an internship at what was then the Harbor General Hospital in Torrance, near Los Angeles. I got together with Bernard and said my good-byes, packed the Pinto, and prepared for the 3,000-mile cross-country trip to my new home. Time constraints and the need to visit my home in Tulsa, Oklahoma, along the way meant that I left HMS before some of the graduation exercises—something I regret to this day.

My new assignment at Harbor General brought its own challenges, ones that were even more daunting and time-consuming than those I’d faced in medical school. Soon, I lost contact with Bernard.

A shared moment of life

California was good for and to me. I successfully completed an internship and residency in internal medicine and followed that with a forty-year practice in communities similar to Boston City Hospital and Roxbury.

My first job as a primary care physician was with the Watts Health Foundation in Watts, California. I later helped found a small internal medicine group partnership in Inglewood. Along the way I met my wife. She was a nurse in the ER that I worked in during my residency rotation. Our courtship was from a classic soap opera set in a hospital ER. Over the years, we became the parents of two beautiful daughters.

On the occasion of my eldest daughter’s forty-first birthday, which we celebrated at a local Los Angeles restaurant, I asked my daughters if they had any unanswered family history questions. My question sparked a revealing and spirited conversation that prompted me to decide to make each of them a pictorial genealogy tree.

While sorting through old pictures, a 3½'' x 4½'' Kodak color print fell to the floor. It was a picture of a young boy dressed in a heavy, plaid winter coat and leather cap. Eyes shut by a humongous smile that showed all his teeth, he was holding a large, round, blue and white cake on which was written “Happy Birthday Bernard.” On the back of the photo, his mother had written “Bernard Feb. 16, ’74. Age 10. His Big Brother gave him the beautiful cake.” 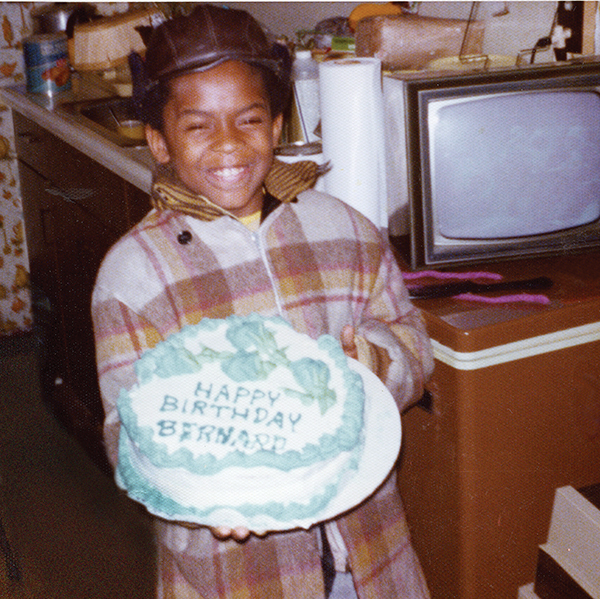 Although I had been back to Boston on a few occasions after graduation, I had been unable to locate Bernard. Most of the visits were in the pre-internet age, so my searches relied on the white pages in the local telephone directory. I did not find his name. As recently as two years ago, when I accompanied my firstborn on a visit to Wellesley College, her alma mater, I was still unable to connect the dots.

As online searching became more common, I tried to locate Bernard that way. I found most often that search sites would tempt me with a bit of information, then lead me on a course that ultimately required my personal information and credit card data. Whenever I reached that point, I opted out.

But after finding Bernard’s picture, I decided to try another online search. I entered his name, state of residence, and the newly found date of birth. Immediately, a match popped up. It offered an address and a phone number.  Being somewhat anxious about how to proceed, I decided to send a text.

“Dear Mr. T., my name is Doctor Stewart Gilbert, and I am trying to locate a Bernard T., who would be about 54 years old, who I worked with in Boston in 1973 in the Big Brother program. Would you be him by chance?”

I checked my phone frequently, hoping for a reply but also realizing that for many complex reasons there are people who prefer not to revisit the past.
A day passed without a response. Then, on the second day after my text, I received a reply.

“Dr. Gilbert I am that skinny little boy you’re looking for. WOW. I still remember the day my life changed.”

Wiping away tears, I sent him my contact information and a copy of the picture of him holding that white and blue birthday cake.

We have since talked by phone and are planning a meeting soon. He recalls some of our adventures in detail and remains appreciative of our time together. One of the things he told me was that he had a difficult time explaining to people why his first car, a Ford Pinto, had “STU” on its license plate.

Despite how pleasant our conversations were, I sensed he had a lingering question around my Boston departure forty-four years ago. I was right. In subsequent conversations I learned that, despite my attempts to prepare the young Bernard for my departure from Boston, he felt I had deserted him. He also told me that over the many years since I had left the city, he had prayed for me.

“Dr. Gilbert I am that skinny little boy you’re looking for. WOW. I still remember the day my life changed.”

After I left Boston, Bernard joined the Boy Scouts, played sports, including hockey, and later, enlisted in the U.S. Army. He is now a retired firefighter and a doting father and grandfather. I learned he had been aware of my location but had held off contacting me, as he didn’t want to intrude upon my new life.

In the sunset of your years, you take inventory and reflect upon legacy. You realize that relationships are of paramount importance. The fact that Bernard and I reconnected after more than four decades was truly a gift from God for both of us.

I am a man of science, but I also am a man of faith. My career in medicine may have set the stage for our meeting, but the relationship that developed was one in which I think the fellowship of faith played a role. As I reflect on it, a verse in Ecclesiastes comes to mind: Cast thy bread upon the waters, for thou shalt find it after many days.

Meaningful relationships matter and are like crumbs cast upon the water that reap loaves of returns.

Stewart L. Gilbert, MD ’74, has retired from his internal medicine practice and continues to live in the Los Angeles area. This year, in honor of Bernard’s fifty-fifth birthday, Gilbert sent him a blue and white birthday cake like the one they shared decades ago.