Outside, In
Taking A History
The Environment

Details, updates, and observations from alumni 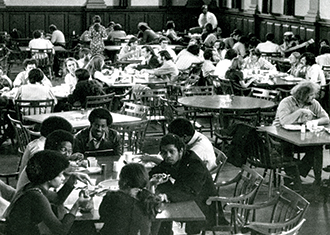 We invited alumni of Harvard Medical School to answer the question: What is your favorite Vanderbilt Hall memory? Vanderbilt, also known as Vandy, was built in 1927 as a residence hall for HMS students. It was part of a national trend to improve the quality of student life by providing on-campus housing. The original building included a living room, faculty dining rooms, athletic facilities, and a student dining hall, pictured here circa 1975. Vandy still houses medical students, but its dining hall has been converted to two floors of administrative departments.

This is easy: any time I had a beer in the apartment of Tom Wright MD ’77. The best memory was having a beer with about a hundred classmates crammed into Tom’s apartment watching the Super Bowl. One of his famous maps has hung in my office for the past 35 years.

I have fond memories of my first year in Vanderbilt Hall. I was in a suite with two roommates. We enjoyed the dining hall, which used tablecloths, and the “biddies” who served as waitresses. Then the Army took over. The gentleman’s abode was turned into a military barracks with bunk beds, and we Army privates had to line up with trays in the cafeteria.

Our classmates in the Navy retained their officer status as ensigns and suffered none of these strictures. What’s more, they delighted in emptying their trash baskets out the windows onto the courtyard, which we then had to clean during our morning policing rounds.

My room was in the deanery, and in the first year one could go down to the kitchen and have a snack. Of course, all of that disappeared under the Army Specialized Training Program. It was wonderful as far as my father was concerned: My $400 tuition, a lot of money in those days, was paid by the government, as were room, board, and supplies.

The meals with friends.

During our second and third years, my roommate, Dick Sanderson ’59, and I lived in a fourth-floor suite overlooking Avenue Louis Pasteur and the dormitory parking lot. We had two private bedrooms. We also had a private bath, which we used, except for the bathtub: Since both of us preferred going down the hall and using the area shower, we turned the bathtub into a goldfish pool. The relatively elegant corner living room had a fireplace and a closet in which we did successfully secret a refrigerator. 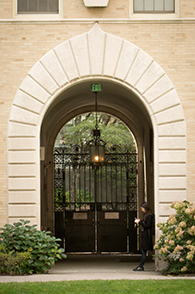 One late fall day, we conjured up the idea of holding a beach party in the winter, a party that would include toasting marshmallows in the fireplace. The next time we visited my family in Maine, we shoveled sand from Popham Beach into a half dozen 50-pound paper sacks, brought them back to Boston, and lugged them up to our fourth-floor suite. Soon thereafter, on a weekend night, we invited a dozen of our closer friends and their dates to join us for a beach party. We moved the furniture out of the living room, placed mattresses and blankets around the outside walls, and filled the center area with sand. We had a splendid gathering. We held a couple more beach parties that winter before the sand became no longer reusable.

The first-week orientation square dance. How can you beat that? My room was robbed, too. That’s not a favorite memory, but it is memorable.

It was a day in late April or early May of 1955 or ’56. In the early afternoon, snow began to fall, and by late evening, there was more than 20 inches. The streets around Vanderbilt Hall were blocked by cars that had stalled or were stuck. Their occupants were settling in the common rooms of the Hall, as were people who worked in the hospitals and medical centers in the area but couldn’t get home. We students helped where we could; we picked up emergency meds from the Brigham for those in need. It was a long night.

We would climb out the window in the kitchen on one of the floors and walk along a narrow ledge on the rooftop. The roof was flat, and you could see Fenway Park; we could watch the Red Sox play for free. It wasn’t the safest thing to do, but it was a lot of fun!

The collegiality and congeniality. The wonderful conversations in that great dining room over breakfast, lunch, and dinner. And, mirabile dictu, having as a street address “Avenue Louis Pasteur.” Not a day went by when I didn’t gaze at that sign, and what a thrill I got from reading it (but I never prayed to it).

Going to the dining hall each evening to eat and talk to friends about whatever.

Students in the Navy could live outside of Vanderbilt Hall. But those in the Army had to live in, even those who, like me, were married. But we found a way down a fire escape and would go home for the night, reappearing for early morning lineup.

The young officer in charge of Army students was disliked, so faculty with clout saw that he was replaced by a jolly, plump senior obstetrician in the Army, who was immensely popular with both students and faculty.

When I arrived in September 1960, I assumed that the second-year student in the room adjacent to mine would be a font of wisdom about all things Harvard. Shaken to learn that he was an Ayn Rand devotee and a dedicated member of the John Birch Society, I sought out the student one door further down the hall, only to discover that these views were shared by this Texan classmate. Happily, I soon learned that this sample of n = 2 was unrepresentative and that a hasty retreat to Canada would be unnecessary.

Meals with classmates in the dining hall—and my surprise twenty-third birthday party in my room in the deanery! A friend distracted me by taking me away while others filled my room with balloons! Then we all toasted marshmallows in my room’s working fireplace.

A group of us played intramural basketball in the Vanderbilt Hall gym, and that relationship continued for decades in the hospitals. It was always fun running into someone on the wards and having a memory of passing them the ball, or (in my case) having them reject your shot.

The first Cannon Ball, for sure!

I spent my first two years in Vanderbilt Hall and liked the convenience of having a dining hall with decent food available three times a day. During my second year I had a room with a working fireplace, which made the room more interesting and livable. I played volleyball as well as squash with several of my classmates on weekends.

Playing the Steinway piano and first-year fun on the fourth floor.

I didn’t live in Vandy, but there were a number of student activities that I participated in there. After body block, I shared a poem that I had composed with the other first-years. The poem expressed my reflections on the donor who had so graciously allowed me to observe and study incredible things I had never seen before.

The blizzard that hit Boston February 5-8, 1978, left 5 feet of snow, 27-foot drifts, and two thousand cars stranded. A state of emergency was called, and HMS closed for several days, an unprecedented action.

In Vanderbilt Hall, the first- and second-year students were marooned, and we were among them. Many of the third- and fourth-year students stayed at the hospital during the storm, caring for patients. Those of us stuck in Vanderbilt agreed that we would have a disco dance every evening until the blizzard was over, which turned into four or five evenings. Of course, 1978 was the disco era of John Travolta in Saturday Night Fever. Each evening at 7 p.m., a boombox would be brought to the lower-level eating area or the common room, and we would dance. At those parties, many people were just learning to dance; we thought that it was normal that new medical students were just learning. In retrospect, it is quite amazing that so many twenty-two-year-olds did not know how to disco.

Many young HMS students did learn to disco during that blizzard, and some of them, including Joseph Madsen MD ’80 and I, later married their dance partner.

Meeting my new classmates, many of whom became lifelong friends.

Probably the 1969 classmate I never met—Michael Crichton MD ’69(Andromeda Strain, Jurassic Park). The real joyful memory was the shenanigans at the Second Year Show that I produced.

I also taught the biochemistry lab for medical students. Our team project used circular dichroism spectroscopy to determine what nonaqueous fluids could be used to freeze whole blood without denaturing the hemoglobin.

After I moved out of Vanderbilt Hall, Pam Taylor MD ’82 and I would sneak back to play racquetball in the basement, under the steam pipes. It was the best way to get warm—we couldn’t afford to heat our drafty old Victorian in Jamaica Plain. 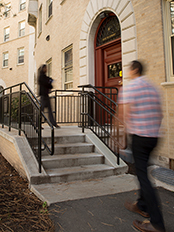 I was married before starting at HMS, so have no memories of days in Vanderbilt Hall. I do, however, have two favorite memories of my days as a medical student at Harvard. One is of my being on the team that wrote and performed the Fourth Year Show. We rehearsed at the Brookline Country Club and were provided with as much beer and as many cigars as we wanted by the Aesculapian alumni. Another memory recalls my fourth-year surgical service at Massachusetts General Hospital. After finishing rounds each Sunday morning, we would go out on the roof of the White building, and, led by chief resident John Burke MD ’51, would make paper airplanes and send them sailing toward Storrow Drive.

In the early 1950s, the Red Scare was at its height; Joseph McCarthy, the junior senator from Wisconsin, was claiming that communists had infiltrated academia in general and Harvard University in particular. The House Un-American Activities Committee, chaired by Rep. Harold H. Velde (R-IL), scheduled open investigational hearings into suspected communist infiltration at Harvard. One hearing was to interrogate a junior member of the Pathology Department at HMS. On the night before the scheduled hearings, and presumably as a protest, someone painted all the toilet seats in Vanderbilt Hall red.

I got up in the middle of the night to use the bathroom and, when flushing the toilet, contaminated an edge of my tennis shoes with red paint. The next day while on a rotation at Massachusetts General Hospital I was summoned to immediately come to the dean’s office. When I entered his office, there was Dean George Packer Berry and about a dozen other stern-faced individuals. Prominently displayed on his desk were my tennis shoes, with their apparently incriminating fleck of red paint. The dean said: “We hold you financially and morally responsible for this serious transgression.”

I thought my medical career was over before it had started. However, a classmate, Lester Grant MD ’55, who had been a medical writer and who was working in the dean’s office, assured the dean that I was too much of a grind to have performed the deed. Furthermore, HMS leadership did not want to publicize the red-painted toilet seat incident during such serious times. That would have ended the episode except for a still inexplicable follow-up: someone placed a red jellybean in my Vanderbilt Hall locked mailbox. This continued day in, day out, week in and week out, until spring break, when, at a party in Washington, DC, a little girl, about age two or three, came up to me, handed me a jellybean and said, “Dr. Waldmann, here is your red jellybean.” That was the last red jellybean I received.

However, in 2015, at our sixtieth reunion, my classmates insisted that I had done the deed, that I had painted all the toilet seats in Vanderbilt Hall red.