Five Questions
From The Dean
The Environment

A different perspective on earthly events sobers and stuns

Increases in the intensity and frequency of wildfires and dust storms as well as the dangerous rise in ocean temperatures, salinity, and levels are threatening human health in the United States and throughout the world. The scale and scope of damage to people and places is indicated in each of the following satellite images.

The October 2017 wildfires in California 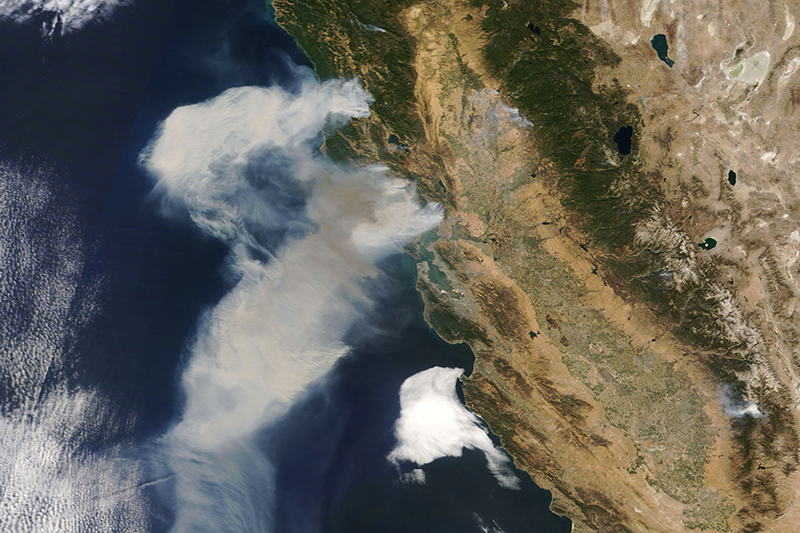 In October, northern California was consumed by fast-moving, intense wildfires that started in a few hundred acres in Napa Valley and, encouraged by powerful winds, triggered blazes in fourteen separate locations. By mid-month, the fires had burned nearly 300 square miles, caused thousands to evacuate, incinerated nearly 6,000 homes and businesses, and killed more than forty people.

According to area firefighters, the blaze in the northern region was fed by vegetation dried from nearly a decade of drought and fanned by dry winds traveling at velocities intensified by seasonal weather systems. Losses were heightened, firefighters added, because many of the fires followed historical fire corridors that are now filled with high-density housing developments.

Research by scientists in California finds that severe wildfires introduce nearly 18 percent of the particulate matter into the air over the United States and also increase the levels of pollutants—carbon monoxide, nitrogen oxides, ozone, and volatile organic compounds—that harm human health.

The psychological stresses from evacuation, uncertainty, and loss felt by California residents were exacerbated by the physiological stresses from the atmospheric pollution generated by the fires. During this period, San Francisco registered a particulate matter pollution level in the hazardous range: 404 out of a possible 500. The level is the highest since record keeping began in that city in 1999.

The air quality index is determined by the U.S. Environmental Protection Agency. When the index value is above 101, the air is considered to be unhealthy, with everyone at risk for adverse health effects. More vulnerable members of the population are at earliest risk; that is, members of groups designated as sensitive—older adults, children, and people with heart or lung disease. The index’s scale is based on the degree to which five major air pollutants, regulated by the Clean Air Act, are present: ground-level ozone, particulate matter, carbon monoxide, sulfur dioxide, and nitrogen dioxide.

According to the EPA, ground-level ozone and airborne particulate matter are the two pollutants that pose the greatest risk to human health in this country.

Changes to Alaska's Columbia Glacier between July 1986 and July 2014

When British explorers surveyed the Columbia Glacier in 1794, its leading edge nosed the northernmost coast of Heather Island, a feature still seen in the bottom center of the July 1986 image. The July 2014 image, from the NASA Earth Observatory, shows that this edge of the glacier has now retreated far up Columbia Bay. The reason: the glacier’s ice has thinned to such a degree that tides in Columbia Bay disrupt its forward progress over water.

A 2016 report from the U.S. Global Change Research Program says that the losses of Arctic sea ice, the Greenland Ice Sheet, and Alaskan mountain and coastal sea ice will continue because of human activities driving changes in the planet’s climate. Residents of Alaska, the report says, are among the first to experience the effects of decreased snow cover and loss of sea ice.

The reduced snow cover means less protection for the permafrost, further accelerating its erosion and its release of long-trapped carbon dioxide and methane, two gases that themselves contribute to atmospheric warming.

The increasing speed of ice melt, both sea ice and the frozen mass that makes up the Greenland sheet, is raising sea levels, jeopardizing coastal communities in Alaska and elsewhere, and eroding shorelines. Tidal flooding in U.S. coastal cities, a phenomenon worsened by rising sea levels, has increased as much as tenfold since the 1960s, and scientists are highly confident that this increase will continue.

Melt from glaciers also alters the oceans’ environment: the fresh water from glaciers depresses the heavier salt water and changes the oceans’ temperature and salinity, which, in turn, affect currents. Increased ocean temperatures encourage blooms of various marine algae, many of which are harmful, even poisonous, to humans.

Because the oceans are the largest carbon sinks on the planet, the increase in anthropogenic carbon dioxide in the atmosphere is, according to research published in 2016, causing the oceans to become more acidic.

A 2017 report in Nature says scientists predict the oceans will move from their normal 8.1 pH to a more acidic 7.7 by 2100. This change, the report continues, has several ramifications, perhaps most visibly the destruction and death of coral and coral reefs, the loss of habitat for fish and other sea life that inhabit reefs, and disruption of the triggers necessary for shellfish reproduction.

Damage to sea life affects the chain of life in the oceans and, consequently, threatens a source of food and livelihood for millions of people.

For decades, experts at NASA have been monitoring sea ice in the Arctic region and noting its behavior over time. Normally, the expanse of ice increases in winter and shrinks in summer, achieving its smallest footprint in September of any given year.

A 1984 satellite photo shows what was an average for minimum ice coverage between 1979 and 2000. It is followed by a 2012 image showing that minimum coverage that year was half the 1979-2000 coverage, a new low for minimum coverage. Despite a slight uptick in 2013, a downward trend of about 12 percent sea-ice loss per decade has occurred since the late 1970s.

This record of decline, according to the global change report, means that scientists can predict with very high confidence that the Arctic’s summer ice will completely disappear within this century. In addition, they have equal certainty that observed sea- and land-ice losses in the Arctic region are outpacing climate model predictions.

Dust storms in Texas and surrounding states in 2014 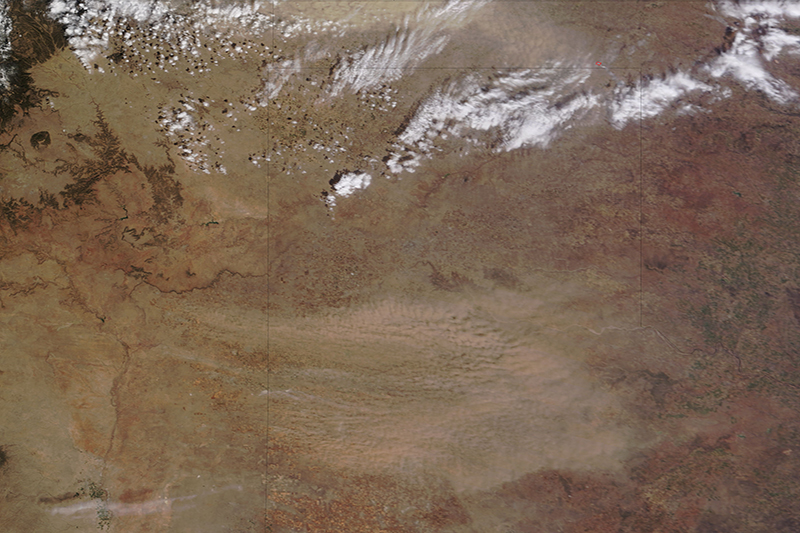 Twice in one week in March, large dust storms swallowed parts of Colorado, Kansas, New Mexico, Oklahoma, and Texas. Mid-month reports on the U.S. Drought Monitor describe soil moisture in western and central Texas and western Oklahoma as “virtually non-existent,” the result of three months of rainfall that was only 10 percent of normal amounts. Strong winds worsened the drought’s effects by wicking away surface moisture.

Of all the solid and liquid aerosols in our atmosphere, dust is one of the most abundant. It is generated or increased by factors linked with human activity, including agriculture, drought, and deforestation, as well as by soils lifted from naturally occurring deserts. Particulates in the air include sulfates, organic carbon, nitrates, mineral dust, and sea salt, which often clump together.

According to NASA scientists, 90 percent of aerosols have natural origins; that is, they arise from volcanic emissions, mineral dust, plants, algae, sea spray, and forest fires. Ten percent are anthropogenic, produced from activities such as fossil fuel combustion; emissions from power plants and other industrial sources; deforestation, overgrazing, drought, excessive irrigation, or other changes to the land; and domestic sources such as cigarettes, trash burning, and wood-burning stoves. Although human-caused levels are lower than those generated naturally, aerosols from human activity can concentrate in urban and industrial areas, heightening the risk to human health.

Drought and dust storms in Colorado and Kansas in 2013 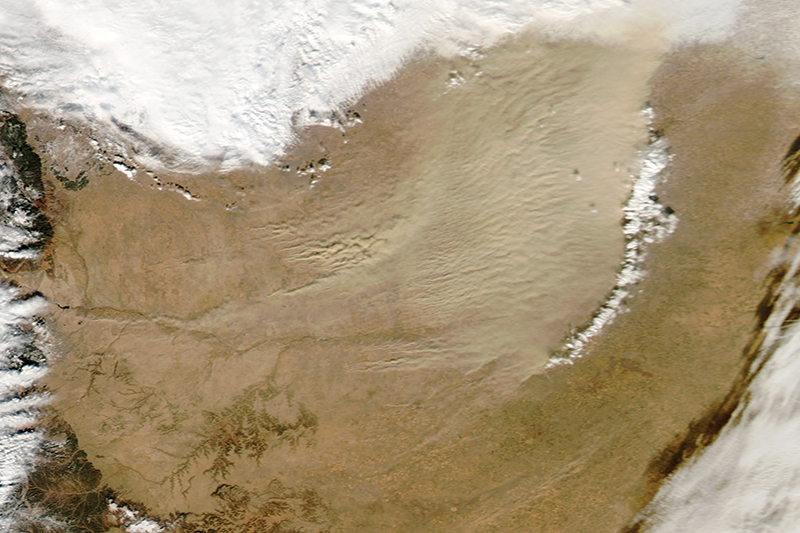 Exceptional drought conditions in early 2013 parched the land in western Kansas and southeastern Colorado, so when a cold front moved east, it swept up dry soil and gathered it into plumes of dust that were so thick, they reduced ground-level visibility to a quarter of a mile. One edge of the storm stretched 150 miles.

Dust storms are described as strong, turbulent winds that bear dust, soil, and sand across normally arid regions, such as the Great Plains region of this country.

According to a 2010 scientific report, the U.S. National Weather Service registers dust storms by drawing on various on-the-ground sources. But the report noted that there are no consistent criteria used by the reporting sources. Efforts to classify these storms, undertaken by groups such as the U.S. Department of Defense, have largely failed; scientists continue to explore new imaging tools that may allow accurate measures of airborne particles in dust storms.

Classifications may be uncertain, but the effects of these storms on human health are not. Dust storms saturate the air with particulate matter, which can harm respiratory and cardiovascular systems. They endanger drivers by hindering visibility and, by introducing disease-causing microorganisms such as fungi and bacteria into lungs and eyes, trigger a number of adverse health conditions including asthma, pneumonia, and stroke.