Here, Yet Not Here
Crucible of Conflict
Elliott Carr Cutler
The Cost of Conflict

Recollections, reverent and otherwise, from a member of the Class of 1945

When I was a student, Elliott Carr Cutler, MD 1913, was the Moseley Professor of Surgery at HMS and surgeon-in-chief at what was then the Peter Bent Brigham Hospital. He had been a brigadier general in the U.S. Army during World War II; when that war ended, he returned to the Brigham. A talented, pioneering surgeon, which he would not deny, Cutler always spoke of himself in the third person and would address those of us who were in the Army as “soldier” when we served as his assistants in the operating room. He often boasted of the sensitivity of his fingers, claiming to have such discrimination of touch that, with one sweep of the blade, he could penetrate through the skin, fat, and muscle of the abdominal wall to attain the intact peritoneum.

One day, he was demonstrating that extraordinary facility to an audience of visiting surgeons who had packed the observation gallery. John Homans V, MD 1903, an iconoclastic, irrepressible, witty, honest, modest, but nonetheless brilliant surgeon who was also at the Brigham, had a habit of wandering from one OR to another between cases. This day, he happened in as Cutler announced to the gallery, “General Cutler will now expose the peritoneum!”

Homans looked in and, raising his voice, intoned, “General Cutler will now suture the gut!”

Homans, of the eponymous sign used in the diagnosis of deep venous thrombosis, was an innovative vascular surgeon who explored surgical approaches designed to prevent venous thrombosis in the lower leg from migrating to the lungs. He tried ligating leg veins first and then went higher and higher with his ligations until he reached the inferior vena cava. We students knew we would be asked about the details of the local anatomy if we scrubbed in on one of his cases. My turn came, and although I had studied with care the lay of the inferior vena cava as seen after a transabdominal approach, Homans, to my horror, elected to reach the inferior vena cava retroperitoneally. The patient, a very large man, was rolled onto his side. Homans paused, then turned to me and, pointing with a long Metzenbaum to something deep red in the depths of the wound, asked, “Whatzzat?” I peered into the narrow chasm of gore and uttered the words never to be said to Homans.

Homans liked to tease his friend and classmate, David Cheever, MD 1901, also a Brigham surgeon. Compared with Homans, Cheever was quite a different person. He came from a prominent Boston family and was formal and correct in every way. Homans would remind his friend at the most inopportune moments—such as during a formal dinner party—about their forays as students into the fleshpots of Haymarket Square.

One day, Homans, having completed his first case, was making his rounds of the Brigham OR. He came across Cheever as he was starting a Halsted mastectomy. Homans went back to his OR for his second case and returned to Cheever’s room, where the skin had been cleared and the lymphadenectomy was underway. Homans left, completed his third case, and returned to Cheever, who, not nearly through, was proceeding with his cell-by-cell dissection in the best Halsted tradition. At this point Homans erupted. “Davey! You’d better get that thing off before it metastasizes!”

Very different was the terrible-tempered William Quinby, MD 1902, a Brigham urologist who became that hospital’s first chief of urology. He once congratulated me on having asked the most stupid question he had ever heard in his many years at Harvard. (I had asked him what, in his experience, was the most common cause of hematuria in adult males. He never answered my question.)

Quinby routinely threw his instruments as he changed from one clamp or forceps to another. One day, as he was operating on a patient under spinal anesthesia, a flying metal instrument landed on the patient’s nose. The patient angrily asked what had happened. Bland assurances and explanations hardly sufficed, but peace finally descended. Then Quinby, who was bent double out of the patient’s line of sight, glowered up at my classmate, the second assistant, and said, “Next time, you catch it!” 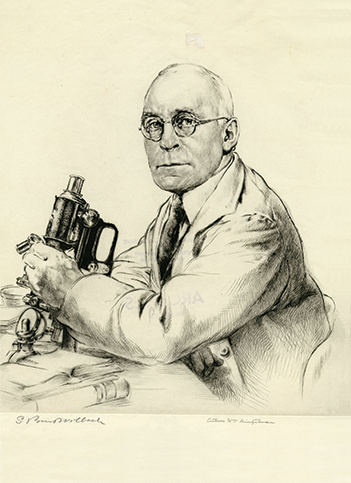 S. Burt Wolbach, MD 1903, a professor of pathological anatomy at HMS and a superb researcher, was chief at both the Brigham and what was then Children’s Hospital Boston. Though a Nebraskan, he adopted the persona of an Eastern establishment gentleman. He always wore a red boutonniere, for example. I found him a little forbidding—austere, aloof, and above the fray. A little pompous, too, to tell the truth.

He was a world authority on the pathophysiology of rickettsial diseases. Typhus was his specialty, and with good reason: He had been part of the international commission to bring that disease under control in the shambles of Eastern Europe after World War I. He was always punctual. One day, he arrived precisely on time for the lecture on typhoid fever he was scheduled to deliver to us. As I recall the details of that day, he lectured smoothly, although many points he made didn’t seem quite right. But who were we to doubt this august professor? He left precisely on time, only to return quickly and ask, “Did I say typhoid? I meant typhus.”

There are many stories from my nine months as a pediatric surgical intern at Children’s, but two are especially memorable for me. The first has to do with a child who had limb pain. Our workup revealed severe scurvy. We asked the mother if she was giving him orange juice. “Oh yes,” she replied. “And I boil it real good so it will be healthy for the wee one.”

The outpatient department was the site of the second incident. A distraught mother had brought in her baby. She had been taking a rectal temperature with a glass thermometer, turned the child on his back, and the item disappeared. Fluoroscopy showed it right where it shouldn’t be: in the sigmoid. I called anesthesia, and with the help of a short-acting anesthetic agent, set about removing the glass rod. I had visions of splintered glass lacerating the gut, so proceeded cautiously with and without an anoscope. I received plenty of advice, none of it useful, and tried various schemes: lavages, transabdominal pressure from above, different instruments, even a rubber-draped Allis clamp.

I finally decided to try my bare finger, hoping my fingernail would get enough purchase above the bulb. It did. Millimeter by millimeter, the item was teased down. Finally, after an hour or so of this drama, the thermometer emerged. I triumphantly picked up the infant and, brandishing the thermometer, approached the anxious mother.

“Oh! I see you got the thermometer out all right, doctor,” she said. “What was the temperature?”

Giulio D’Angio, MD ’45, a retired radiologist, is a professor emeritus of radiation oncology at the Perelman Center for Advanced Medicine at the Hospital of the University of Pennsylvania. He lives in Philadelphia with his wife, Audrey.