Opsin Options
The Art of Medicine

A profile of Michelle Rivera, Class of 1992

“My father died on Christmas Day,” says Michelle Rivera ’92, “when I was eleven years old. He had been sick for a short time, but my parents didn’t understand what the doctor was telling them and didn’t know what was going on.”

After her father’s death, Rivera vowed to be better prepared for family health crises; she decided to become a doctor. Later, she realized that it was also the complexity of medicine that attracted her. Medicine required a lot of science but also a lot of critical thinking and creativity.

With their father and husband gone, Rivera and her mother found themselves “plunged into pretty desperate economic times.” Yet she grew up secure in the knowledge that her mother believed in Rivera’s career dream and that “she would be willing to give everything up to pay for my education.” For her part, Rivera believed that she could thank her mother best by getting good grades and getting into medical school. Her strategy worked: She was accepted  into HMS.

While at HMS, Rivera selected radiology as her specialty. It attracted her because it was where all the new technologies were coming from, guaranteeing Rivera a career in which she would be “always learning something new.”

Rivera’s expectations for her chosen path have been more than met. She loves her work, despite the intense emotions that it can trigger. When delivering good news, such as a negative result on a cancer screen, there are waves of relief and gratitude to deal with. And when she must deliver bad news, “the tears are real, and the tears of the family are real. You know what lies ahead for the patient.” 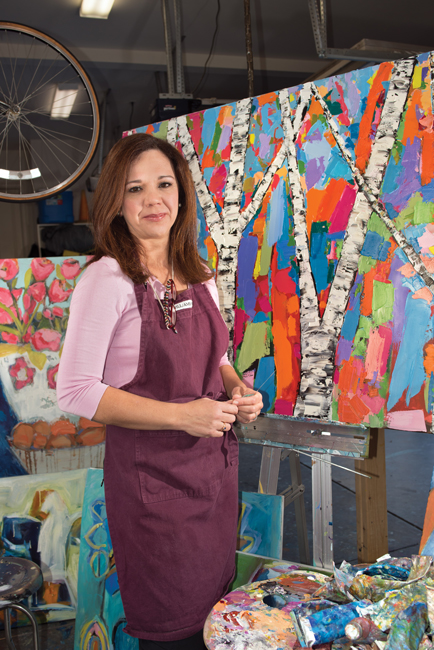 Although it wasn’t a conscious decision to find an outlet for these emotions, Rivera found one in painting. She came to fine art gradually. While she was an undergraduate at Columbia University in New York City, Rivera loved looking at the Impressionist paintings in the Metropolitan Museum of Art. But she didn’t start painting herself until about ten years ago, when she started taking classes.

Painting, Rivera says, brings her physical joy. “It’s all about moving the paint on the canvas. I paint at an almost frenetic pace, because I just want to transfer all my energy onto the canvas.”

A Thing of Beauty, a Joy Forever

Rivera’s twin vocations complement each other well. The world of breast imaging is tightly rule-driven: “There are rights, and there are wrongs,” she says, along with a highly specific lexicon and a complex coding system for imaging findings.

“On the other hand, when I paint,” she says, “it’s my world. And the rules are the rules that I make.”

Rivera sees her art as a lifetime skill. She admits that when she is eighty years old she may no longer be able to read a mammogram, but she will be able to paint. And in the meantime, she has something she loves to provide an outlet for stress and just add a dimension of joy to her life.