A Thousand Words
Color Therapy
The Art of Medicine

Color blindness first appeared in the medical literature in 1684, in an account of a woman who “could see very well, but no color beside black and white,” by Daubeney Turberville, an oculist in England, and published in the Philosophical Transactions of the Royal Society.

Evidence of interest in testing for the condition surfaced later, in the mid-nineteenth century, when George Wilson, a professor in Edinburgh, noticed that some of his students could not distinguish certain colors in chemical precipitates. This revelation led Wilson to develop a test that he hoped could be used to determine fitness for occupations that relied on color perception such as painter, dyer, tailor, chemist, seaman, and railway worker. 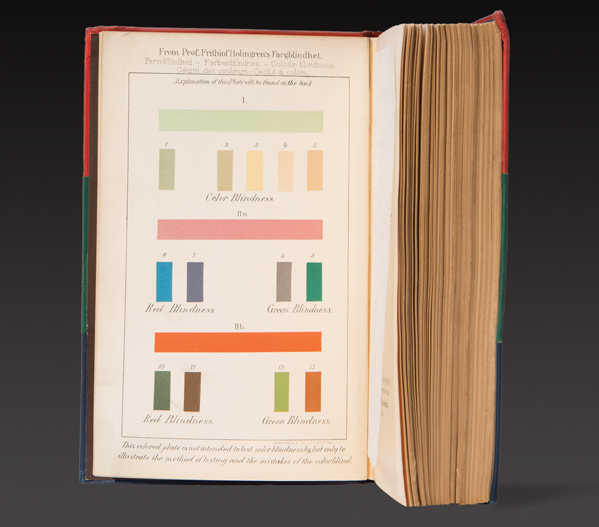 Benjamin Joy Jeffries, Class of 1857, an ophthalmic surgeon at what was then the Massachusetts Charitable Eye and Ear Infirmary, took on the idea of occupational testing and advocated for mandatory color blindness testing in railway employees in the United States, writing that “[if] the medical, popular, and daily press would take the subject up … the railroads would soon feel forced to act immediately in the matter.”

Jeffries’s 1879 book Color-Blindness: Its Dangers and Its Detection is dedicated to his friend Frithiof Holmgren, “because I consider that to him above all others do we owe the present and future control of color-blindness on land and sea, by which life and property are safer, and the risks of travelling less.”

Holmgren was a Swedish ophthalmologist who developed a test for color blindness and, as Jeffries did in the United States, strenuously advocated for mandatory testing for the condition in railway workers in Europe.

Holmgren’s test wasn’t the first, but it was simple, portable, and greatly reduced the amount of time needed to administer a single test. Based on the principle of comparison, the test required an individual to match a skein of woolen yarn to one in a group of colored skeins. The frontispiece from Jeffries’s book, reproduced here, is a color plate of the test, which was “only intended to illustrate the characteristic mistakes of the color-blind and the colors of the sample worsteds to be employed” in the test.