Where It's Needed Most

Terry M. Bennett, MD ’64, MPH ’69, believed that people from all walks of life deserve high quality health care. Over the course of his career, serving patients from Los Angeles to Saudi Arabia, he was known to provide care for the homeless, the uninsured, and prisoners. When he received a terminal cancer diagnosis in 2011, he never wavered in his mission, treating patients at his New Hampshire walk-in clinic for eight more years, until just a few weeks before his death at the age of 81. 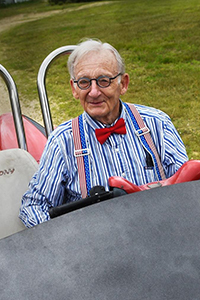 felt a spiritual connection to the practice of medicine, and there were instructors at Harvard Medical School who really reinforced that for him,” says his wife, Piper Allison. “He had an amazing mind and never stopped learning or being inquisitive about the practice of medicine. That started at HMS, where he was surrounded by people who felt the same way. In an empathic way, he wanted all of his colleagues to experience this as well. It’s something he wished for every physician.”

For the last 30 years of his life, Bennett ran his clinic as a primary care physician while simultaneously operating businesses selling antiques and exotic cars. To thank HMS for the quality of education he received, he used his collection of antique automobiles and motorcycles to establish a charitable remainder unitrust (CRUT) that would ultimately benefit the School. The CRUT recently distributed $3.9 million in unrestricted, flexible funding to be used at the dean’s discretion.

HMS interim Chief Financial Officer David Smallwood says this type of support is key to maintaining the School’s stability and strength. This is especially true given the financial challenges stemming from COVID-19, as HMS has had to thoughtfully consider the pace and scale of important investments in its research and education programs. “Flexible support such as the unrestricted aid so generously given by the Terry M. Bennett Charitable Remainder Unitrust effectively allows the dean to direct funds to those areas of need most critical to the School’s strategic direction within our ever-changing context, thereby helping to protect and ensure the ongoing strength of our programs.”

Terry felt a spiritual connection to the practice of medicine, and there were instructors at HMS that really reinforced that for him.

Bennett would surely want to keep those programs strong, as his passion for his medical education never waned. He kept in touch with his classmates and even attended his 55th Reunion in June 2019, just three months before he died. His wife says he was particularly thankful for his opportunity to attend HMS on a full scholarship.

“Terry felt that his scholarship allowed him to do a lot of risk-taking in his career. He could serve in places that were underserved and go on adventures because he wasn’t beholden to debt,” she says.